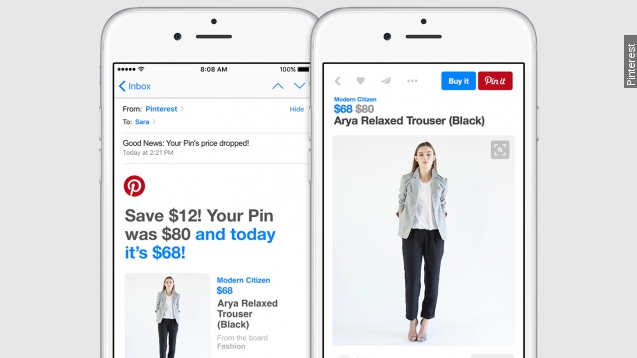 Pinterest has a new tool for alerting you to price drops on buyable items you've pinned.

Don't be surprised if you start doing more of your online shopping through Pinterest. (Video via Pinterest)

The visual bookmarking social site pushed out a new tool to its users Thursday that sends alerts about price drops for products they've pinned. (Video via Pinterest)

It's similar to how Amazon will let you know if prices have changed on items sitting in your cart, except that Pinterest's version is a bit more proactive.

It will only work on buyable pins, which were new to the site in June. If a price changes on one of those, the pinner will get an alert by email or through the app that an item's cost has dropped. (Video via Pinterest)

If you're not familiar with Pinterest or its buyable pins, let me clue you in on how this will likely end up making the site more money.

Pinterest primarily makes money off advertising. And according to documents TechCrunch got its hands on in October: "Pinterest is generating $1.44 per active user, based on its 2015 projections. It expects this number to grow by $9.34 by 2018." (Video via Pinterest)

And the way to make that happen is to keep users on the site longer, which Pinterest is doing by turning its digital cork board into more of a marketplace. (Video via Pinterest)

Plus, these new tools also open up more ways to charge brands down the road. For instance, we wouldn't be surprised if advertisers started paying to get their buyable pins placed at the top of certain searches — y'know, like the rest of the Internet. (Video via Pinterest)