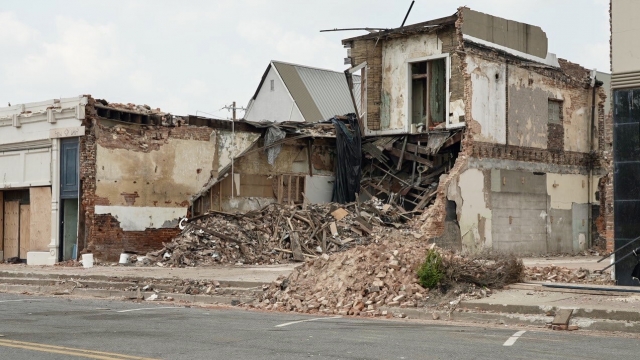 Mayfield officials say there are safety concerns and have several streets blocked off because historic buildings could fall.

It was only six months ago that hundreds of lives were changed in this community. Today, there are signs of progress, like the debris being cleared. There are also signs that more needs to be done. Back in December, when tornadoes sliced through Kentucky, restaurant owner Wayne Flint rolled up his sleeves and got to work rebuilding.“I don't care if I sell anybody an egg or not, it gives people hope,” said Flint.  Flint, like many people in this small city of 10,000, is afraid that if people don’t see progress they might not come back. “If you come out your door and you look at all the destruction, and you see nothing going but bad things — I feel like if we start putting the building up, say, hey, look, we are going to rebuild, let's stay here and do this,” said Flint. Now, his new building is standing in downtown Mayfield. Decorations greet you as you walk up.“I am tickled to death, and I know my wife is tickled to death. She has spent countless hours trying to find the grill, trying to find these red stools that was in the other building for 70 years. I mean, they're almost identical to what was in the old restaurant,” said Flint. It’s a sign of progress. And over an hour away in Hopkins County … “My name's Dwain Eagen, live here in Barnsley — what's left of Barnsley.” In May, Dwain and his wife Rachel celebrated their son’s engagement and are looking forward to rebuilding. A new four-bedroom home is already shaping up, but now they face supply chain holdups – namely getting the concrete truck in.“It's just a slow process,” said Eagen.Back in Mayfield, Mayor Kathy O’Nan says Dec. 10 was the worst thing to ever happen to her city. It’s also her first time dealing with a natural disaster. “In our county, we lost 24 souls that night,” said O’Nan. Nine of those 24 people died when the tornado destroyed a Mayfield-based candle factory.  Six months later, most of the debris downtown is gone, but some say progress has been curbed.City officials say there are safety concerns and have several streets blocked off because historic buildings could fall.“We lost all of our city buildings. We are in a temporary mayor's office right now and our fire department’s in one place, our police department’s in one place, our public works is mostly working out of their vehicles. And so, we have to rebuild our city government campus,” said O’Nan.There is money available from the state and of course the city’s own property insurance policies. And while some people are hoping to just get things done, it won’t be a quick process to rebuild.  The people of Mayfield say they live by faith, and they have hope for the future. They say they don't want to end up a distant memory as they continue to recover from this tragedy.