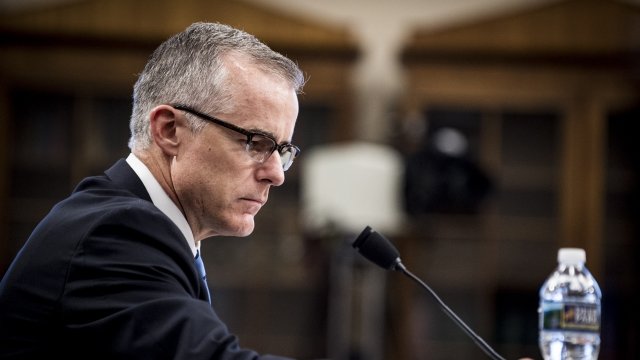 The memo reportedly says the president asked Rod Rosenstein to reference the Russia probe in a letter criticizing James Comey.

Unnamed sources told The New York Times the memo says that in a May 2017 meeting, Deputy Attorney General Rod Rosenstein told McCabe that President Donald Trump asked him to reference the Russia investigation in a letter criticizing Comey.

Rosenstein did not mention Russia in his May 9, 2017, letter that Trump used as justification to fire Comey. Instead, Rosenstein criticized Comey's handling of the Clinton email investigation.

Special counsel Robert Mueller's investigation has reportedly expanded to include whether anyone might have tried to obstruct justice by firing Comey, who was overseeing the Russia investigation before he was let go.

The New York Times reports special counsel Robert Mueller has a list of nearly 50 questions he'd like to ask the president.

A source that knew the details of Trump and Rosenstein's conversation told the Times that Trump had just wanted it made clear he wasn't a target of the Russia inquiry.

Spokespeople for both McCabe and the Justice Department did not comment on reports about the memo.