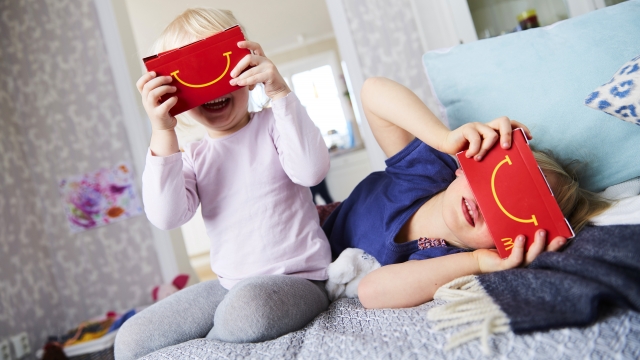 McDonald's locations in Sweden will offer the Happy Goggles for a limited time, but the promotion could see a wider release in the future.

Happy Meal toys just aren't as simple as they used to be.

McDonald's locations in Sweden are introducing Happy Meal boxes that fold into virtual-reality viewers called Happy Goggles. The promotion will take place between March 5 and 12. All you need is a smartphone to go with it.

The viewers are basically a Google Cardboard knockoff that probably smell like french fries.

The promotion will take place during the Swedish recreational holiday sportlov — akin to spring break — when families traditionally go skiing together.

So McDonald's is also launching a skiing VR game that is meant to be fun and also teach kids to be alert and aware of obstacles on ski slopes. Although, any VR app would likely work with the device.

Right now, the Happy Meal boxes are only available in Sweden, but a McDonald's spokesman told AdWeek the company could roll out global VR promotions in the future if this one is successful.

This video includes images from McDonald's Sverige and Getty Images.