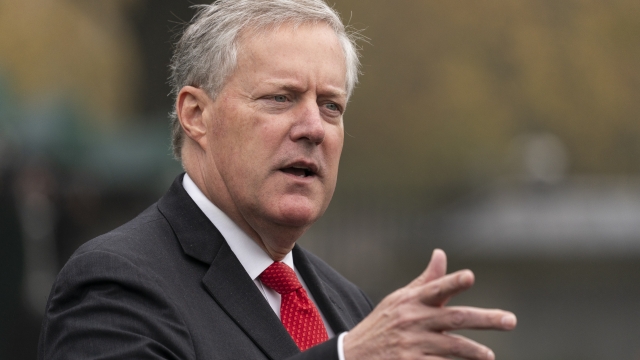 Former chief of staff Mark Meadows, lawyer Sidney Powell are among the highest-profile members of Trump's circle to be called to testify in the probe.

The prosecutor investigating whether Donald Trump and others illegally tried to influence the 2020 election in Georgia is seeking to compel testimony from more allies of the former president, including former chief of staff Mark Meadows and lawyer Sidney Powell.

Meadows, Trump's final chief of staff, and Powell, a dogged advocate of the president's false claims of widespread election fraud, are among the highest-profile members of Trump's circle to be summoned to testify in the probe, joining other top figures including Trump lawyer Rudy Giuliani and U.S. Sen. Lindsey Graham. It further raises the legal stakes for the former president as he weighs a 2024 presidential bid.

Because they don't live in Georgia, Willis has to use a process that involves getting judges in the states where they live to order them to appear. The petitions she filed Thursday are essentially precursors to subpoenas. Fulton County Superior Court Judge Robert McBurney, who's overseeing the special grand jury, signed off on the petitions, certifying that each person whose testimony is sought is a "necessary and material" witness for the investigation.

Lawyers for Kemp argued that he is protected from having to testify by the principle of sovereign immunity.

Willis wrote that each of them has unique knowledge about their communications with Trump, his campaign and others "involved in the multi-state, coordinated efforts to influence the results of the November 2020 elections in Georgia and elsewhere."

George Terwilliger, a lawyer for Meadows, declined to comment Thursday. Epshteyn didn't immediately respond to a request for comment. Powell and Waldron could not immediately be reached.

Willis last month filed similar petitions for seven other Trump associates and attorneys, including Giuliani and Graham. Giuliani, who's been told he's a target of the investigation, testified before the special grand jury last week. Graham is fighting his subpoena in court.

Also on Thursday, lawyers for Georgia Gov. Brian Kemp appeared in court to argue that he shouldn't have to testify before the special grand jury. And Kenneth Chesebro, a lawyer who was part of the earlier batch of Trump associates whom Willis sought to compel to testify, filed a motion to quash his subpoena.

In the petition seeking Meadows' testimony, Willis wrote that Meadows attended a Dec. 21, 2020, meeting at the White House with Trump and others "to discuss allegations of voter fraud and certification of electoral college votes from Georgia and other states." The next day, Willis wrote, Meadows made a "surprise visit" to Cobb County, just outside Atlanta, where an audit of signatures on absentee ballot envelopes was being conducted. He asked to observe the audit but wasn't allowed to because it wasn't open to the public, the petition says.

Between Jan. 30, 2020, and Jan. 1, 2021, Meadows sent emails to Justice Department officials making allegations of voter fraud in Georgia and elsewhere and requesting investigations, Willis wrote. He was also on a Jan. 2, 2021, phone call with Georgia Secretary of State Brad Raffensperger, during which Trump suggested the state's top elections official could "find" enough votes to overturn his narrow election loss in the state.

In the petition seeking Powell's testimony, Willis wrote that Powell is "known to be affiliated with both former President Donald Trump and the Trump Campaign." The petition says attorney Lin Wood said in a television interview that Powell was part of a group who met at his home in South Carolina "for the purpose of exploring options to influence the results of the November 2020 elections in Georgia and elsewhere." Wood, who's licensed in Georgia, said Powell asked him to help find Georgia residents to serve as plaintiffs in lawsuits contesting the state's election results, Willis wrote.

In June of this year, the U.S. House committee investigating the Jan. 6, 2021, attack on the U.S. Capitol released a deposition of Powell in which she said that in the weeks following the 2020 election, Trump asked her to be "special counsel to address the election issues and to collect evidence," saying he was frustrated with law enforcement agencies, Willis wrote.

Last week, the Georgia Bureau of Investigation confirmed that it is helping the Georgia secretary of state's office look into an alleged breach of elections data in Coffee County in south Georgia, Willis wrote. She noted that publicly reported emails indicate that Powell coordinated with a data solutions company to get elections data from Coffee County in early January 2021 and was involved in similar efforts in Michigan and Nevada.

Special grand juries are impaneled in Georgia to investigate complex cases with large numbers of witnesses and potential logistical concerns. They can compel evidence and subpoena witnesses for questioning, but they do not have the power to indict. When its investigation is complete, the special grand jury issues a final report and can recommend action. It's then up to the district attorney to decide whether to ask a regular grand jury for an indictment.

During the hearing Thursday on Kemp's attempt to avoid testifying, his lawyers argued that he is protected from having to testify by the principle of sovereign immunity, which says the state can't be sued without its consent. Prosecutors argued that's not applicable because Kemp is not being sued but instead is being called as a witness to provide facts for an investigation.

Kemp's attorneys accuse the district attorney of pursuing a "politically motivated" probe, something she has vehemently denied.

Kemp attorney Brian McEvoy argued that, if the governor does have to testify, it shouldn't happen until after the general election. Kemp faces a rematch with Democrat Stacey Abrams in November in one of the most high-profile and closely watched gubernatorial contests in the country.

"Your Honor is well aware of where we are, what state we're in, what race we're facing, and the governor ought not have to suffer political consequences for invoking a legal right," McEvoy said.

Prosecutor Donald Wakeford noted that Willis waited until after contentious primary elections in late May to begin calling witnesses before the special grand jury for that very reason. The governor could have quietly honored a subpoena to appear last week without any media attention, Wakeford argued, but instead, his attorneys filed the motion to quash the day before, thrusting the issue into the public eye.

"To continually insist that this is a situation engineered by the district attorney's office to the intentional detriment of the governor is just not true," Wakeford said.

Judge McBurney did not immediately rule and it wasn't clear when he would.