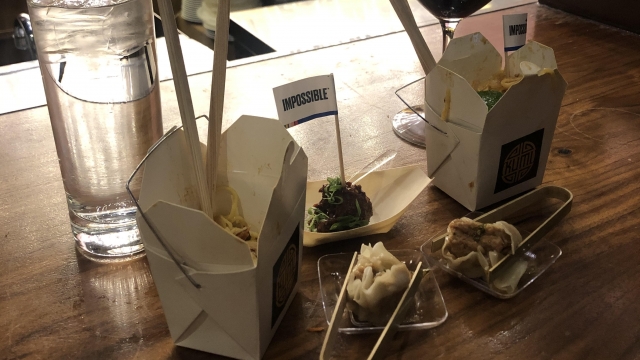 Plant protein options are growing as Impossible announces a new faux pork. It's healthy for people and could be healthy for the environment, too.

More and more these days, meat isn't actually meat. The startup that launched the impossible burger in 2016 is now adding impossible pork to the list.

Impossible plans to hand out more than 25 thousand food samples in one week at CES this year.  But this "pork" is made from plants, not pigs. It's aimed at lowering the reliance on animals as a food source.

"Although beef from an environmental standpoint, on a per pound basis is by far the worst offender, pork is not that much farther behind. It's a huge contributor to global environmental issues. Pigs convert the protein they consume into pig protein with less than 10 percent efficiency," Pat Brown, CEO & Founder of Impossible Foods said during a press event announcing the product.

You might call Impossible Pork the other, other white meat. It's made from heme, a plant based protein that, in this case, mimics the texture and flavor of pork. Impossible says it's developing it partly to target Europe and Asia, where the preferred meat is pork.

It's nuts what foods can be turned into milk.

"We launched impossible what we first it a market test, the impossible whopper. It did really well. We just set a goal for our national rollout. And since then, it has been great," Fernando Machado, Global CMO of   Burger King told reporters.

Beyond Meat, a competitor to Impossible Burger, also sells plant-based ground meat and sausages, and has partnered with KFC to offer plant-based chicken.

One selling point is that plant-based proteins can offer health benefits like lower cholesterol and fat content than actual meat. But the meatless surge could be healthy for the environment, too.

A 2019 United Nations report says the world's food supply is at risk — thanks not just to climate change but also to the land and water impacts of raising livestock.

Pat Brown, CEO and Founder of Impossible, says catastrophic climate change and a catastrophic meltdown in biodiversity are the two biggest threats humanity has ever faced. He says fake meat could help lower both of those risks. He also hinted at how that could impact their next launch.

"One that doesn't get enough attention is the fish and seafood, which from from a biodiversity standpoint is an utter catastrophe. And even from a greenhouse gas standpoint, a huge problem. So that's a high priority," he said.

Another Report Says Eating Meat Is Bad For The Environment

A British advisory board says if people ate less meat and more plants, it would have a "significant impact" on reducing emissions.