Medals To Be Awarded To Honor Jan. 6 Responders 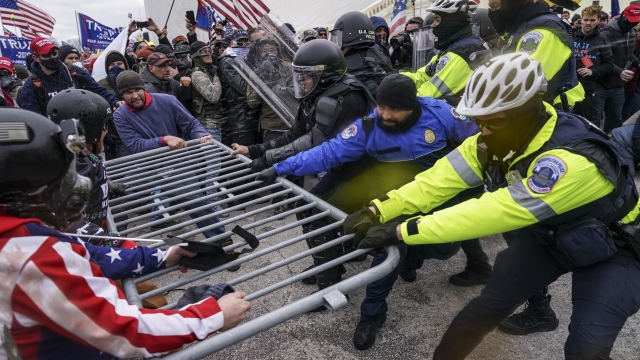 The medals will be displayed to honor their sacrifices.

The Senate has voted to award Medals of Honor to the Capitol Police and the Metropolitan Police Department for protecting Congress during the Jan. 6 insurrection, sending the legislation to President Joe Biden for his signature.

Under the bill, which passed by voice vote with no objections, there will be four medals – to be displayed at the Capitol Police headquarters, the Metropolitan Police Department, the U.S. Capitol and the Smithsonian Institution.

Hundreds of officers from the two police departments responded to the attack and dozens of them were beaten and injured as the mob of former President Donald Trump's supporters pushed past them to break into the building and interrupt the certification of Biden's victory. The police and National Guard troops eventually cleared the building and the count resumed.

The medals are "a recognition that will be on display for people to understand and remember what these officers did," Senate Rules Committee Chairwoman Amy Klobuchar, D-Minn, said in an interview with The Associated Press shortly before she called up the bill for passage.

While introducing the legislation, Klobuchar said children of the future will be able to walk by and see the medals in the Smithsonian, and their parents will tell them: "This happened, this attack happened."

Senate passage comes after 21 House Republicans voted against the measure in June, some of them objecting to the language in the bill that referred to a "mob of insurrectionists." Trump, along with many Republicans still loyal to him, has downplayed the rioting and tried to rebrand it as a peaceful protest, even as law enforcement who responded that day have detailed the violence and made clear the toll it has taken on them. Four officers gave emotional testimony in Congress last week about their mental and physical injuries.

No Senate Republicans objected. The top Republican on the Senate Rules panel, Missouri Sen. Roy Blunt, said the medals recognize' "the selflessness, the dedication, the willingness to stand in the way of danger." Blunt said he hopes they will send "a clear message" of appreciation to the two departments.

At least nine people who were there died during and after the rioting, including a woman who was shot and killed by police as she tried to break into the House chamber and three other Trump supporters who suffered medical emergencies. Two police officers died by suicide in the days that immediately followed, and a third officer, Capitol Police Officer Brian Sicknick, collapsed and died after engaging with the protesters. A medical examiner determined he died of natural causes.

This week, the Metropolitan Police announced that two more of their officers who had responded to the insurrection had died by suicide. Officer Kyle DeFreytag was found dead on July 10 and Officer Gunther Hashida was found dead in his home Thursday.

"We are grieving as a department," the police said in a statement.

While it is unclear what exactly led to their deaths, lawmakers praised them for their service on Jan. 6. Sen. Susan Collins, R-Maine, said ahead of the bill's passage that her heart goes out to the families of the officers who took their own lives.

"I hope each and every one of us will take time today to thank these courageous men and women who are working so hard to keep us safe, many of whom still bear the physical injuries and the emotional trauma of that dark day in our nation's history," Collins said.

Klobuchar said she doesn't know the reasons for the two officers' deaths in July, but said that "at some point it's not a coincidence."

The suicides are "just one more sad and tragic story of people who were there protecting us who clearly suffered from that day," she said. "It affected people."