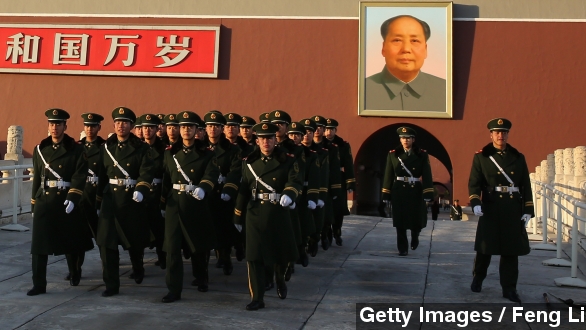 China's pun ban brought out the best and the worst in Western wordplay — but the silly-sounding ban might be a precursor to more serious censorship.

Western media often takes no small pleasure in lampooning China's totalitarian government and its occasionally silly decrees. But this time, things got a little out of hand.

The trouble started with an edict from the country's media regulation agency banning the use of puns or wordplay in advertisements and broadcasts.

The agency cites ad campaigns which played on common Chinese phrases, warning such puns "create misunderstandings for the public, especially for minors," and can lead to "cultural and linguistic chaos."

But those concerns weren't enough to stop international media outlets from exercising the rights that their Chinese brethren recently lost.

RT, Fox News and The Wall Street Journal were all willing to test how flexible the word "pun" itself can get.

Mediaite came up with this little gem, which might be racist. We're not really sure.

And local Colorado magazine The Rooster, not generally known for international coverage, took full advantage of this story to jam as many puns into our faces as they could manage. Good job, guys.

Oh, and this probably goes without saying, but China's pun-averse media censors should never, ever visit Reddit. Ever.

All joking aside, there is a serious reason to care about this seemingly ridiculous story. In a country where oppressive media laws restrict political speech, wordplay and euphemisms are a common method of getting around the censors.

The most commonly-cited example is the "Grass Mud Horse": three Chinese characters which mean either a mythical alpaca-like creature or an unprintable obscenity about mothers depending on how you read them.

Other notable animal examples include the "River Crab," which in Chinese sounds like the word for "Harmony" and can refer to censorship; and the "Valley Dove," an animal which sounds like Google and can no longer be found in China.

Government subversion aside, Language Log notes puns are a central component of China's linguistic culture. "Because of the huge number of homophones in the language, punning is super easy in Mandarin, and Chinese are extremely fond of engaging in this type of verbal play."

One expert told The Guardian, given the cultural significance of puns, it's hard to imagine Chinese authorities cracking down on harmless wordplay unless they are targeting dissent.

"That's the most ridiculous part of this: [wordplay] is so much part and parcel of Chinese heritage. ... I wonder if this is not a preemptive move, an excuse to crack down for supposed 'linguistic purity reasons' on the cute language people use to crack jokes about the leadership or policies. It sounds too convenient."

If you're curious about what has the censors all riled up, the China Digital Times has a comprehensive lexicon of some other examples of Chinese anti-government Internet slang. Predictably, there's some racy language involved.