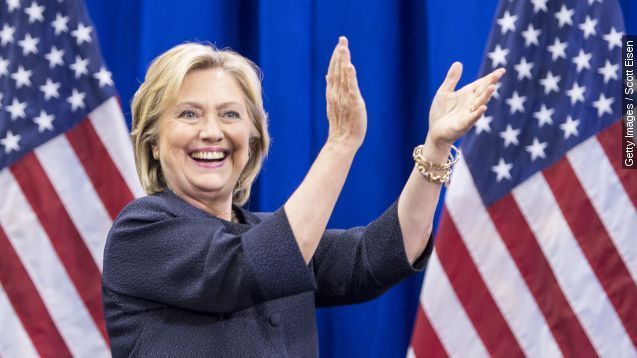 For 14 straight years, Hillary Clinton has won this poll as the "most admired" woman.

For the 20th time, Hillary Clinton has been named the most admired woman of the year.

That's according to a new Gallup poll, which asks the open-ended question, "What woman that you have heard or read about, living today in any part of the world, do you admire most?" Thirteen percent of people said Hillary Clinton as their first or second answer.

A random sample of 824 adults were asked the question via a telephone interview. The margin of sampling error was plus or minus 4 percentage points at the 95 percent confidence level.

The key to winning a poll like this might be media exposure. The editor-in-chief of the Gallup poll told The New York Times, "It very much reflects who has been in the news, and who people can recall at a short period of time when an interviewer asks them."

There's no question that Clinton has had a secure spot in the headlines this year. According to analysis by the Media Research Center, Clinton gets 14 times more network news coverage than Sen. Bernie Sanders.

And she's been in the limelight quite a bit over the past two decades. The first time Clinton won the Gallup poll as "most admired woman" was in 1993 when her husband, Bill, took presidential office. Since then she's served as first lady, a United States senator and secretary of state.

But consistent news exposure also means she has plenty of critics. According to a recent Quinnipiac University poll, nearly 60 percent of participants say Clinton is "not honest and trustworthy." The margin of error on that poll was about 3 percentage points.

There certainly seems to be a political theme among the Gallup results. Seventeen percent of participants named President Barack Obama as the most admired man in 2015. Behind Obama was a tie between Pope Francis and Donald Trump.

Correction: A previous version of this video took a critical view of the Gallup poll based largely on the poll's sample size. In fact the sample size was standard for this type of poll. The story has been revised.