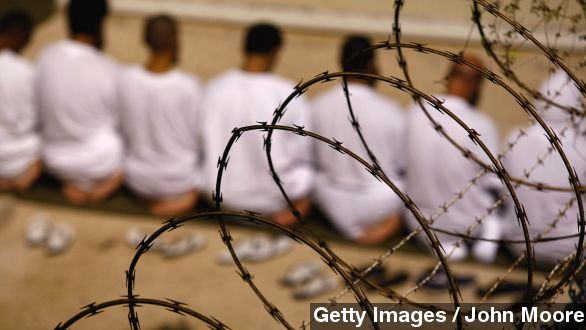 The president calls it one thing, much of the media, another. (Video via The White House)

“Their findings on enhanced interrogation techniques.”

A newly-released Senate report on post-9/11 interrogation practices has re-opened the long-running debate over how to define torture.

And it really is a long-running debate.

"This Government does not torture people,” President George W. Bush said in 2007. (Video via C-SPAN)

The Bush administration admitted the existence of secret CIA prisons in 2006, but labeled their practices — ranging from shaking a prisoner to waterboarding — as “enhanced interrogation.”

And that has always clashed with both the generally accepted definition of torture and the United Nations' definition that says any extreme suffering or pain inflicted on a prisoner to gain information is indeed torture.

And the American press has trouble handling that contradiction.

It’s the policy of The Washington Post not to use the term torture to describe waterboarding and other tactics.

Politico did use it Tuesday, writing the term “reflects the commonly accepted definition.”

The New York Times lands somewhere in the middle. It uses the word when it can say for sure "interrogators inflicted pain on a prisoner in an effort to get information.”

There’s more to this debate than just rhetoric. Polling has shown when the phrase “enhanced interrogation techniques” is used, public opposition to those tactics often referred to as torture actually decreases.