How Virtual Therapy Can Lead To Real-World Healing 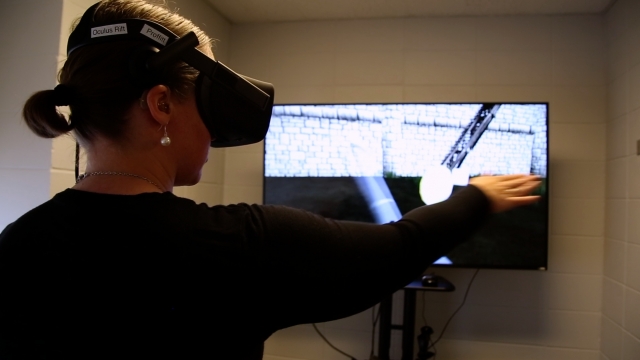 Virtual reality headsets and cameras can supplement and in some cases even improve occupational therapy.

Virtual reality's promise doesn't end with games and movies. Researchers and doctors are turning to VR for everything from neuroscience to psychiatry to occupational therapy.

Studies have found strapping on a headset can help treat phobias or post-traumatic stress disorder. In some cases, it can be just as effective as real-life exposure therapy.

But new research shows the benefits of virtual therapy go beyond the brain. Dr. Rachel Proffitt is exploring virtual reality games as a tool for occupational therapy, where patients rebuild everyday skills, like reaching for objects on high shelves or brushing their teeth.

Virtual Reality Could Bring Crime Scenes To The Courtroom

Researchers are exploring the possibility of using virtual reality in European courtrooms.

"My focus is getting people back to that full normal-as-possible life after an injury, a disability, some sort of diagnosis," Proffitt said in a recent interview. "It involves the entire body — and I mean the entire body, brain included."

In her lab at the University of Missouri, Dr. Proffitt uses a Kinect camera and a virtual reality headset to gather information while the user plays games to help them recover.

The work patients do might be virtual, but they get the same real-world benefits as traditional therapy — and more. Research shows if you ask people to focus on an external goal, rather than on what they do to reach that goal, they perform better. That's what the game is for.

"It takes their mind off 'Oh, I just did 10 repetitions of this movement,'" Proffitt says. "They get immediate feedback from the game. They get sparkles and dings when they're successful."

Much of Proffitt's work probably wouldn't be possible if things like headsets and cameras weren't getting more capable and less expensive.

"It would take me two hours to gather all the data that I can get from just 30 minutes of somebody playing this game," Proffitt says. "Things are getting faster. You no longer need a large computer to run the Kinect. It runs on a regular laptop."

The game is causing floods of foot traffic in some weird places — for better and for worse.

But VR as therapy is a new field, and VR as occupational therapy is even newer. A lot of Proffitt's early research is testing to see what's feasible and what's not, but the results already show her patients are making real-world gains. Eventually, she'd like to see VR therapy in hospitals, clinics and homes.

"I want somebody to get better; I want somebody to improve," Proffit says. "'Now I want you to go into your kitchen and unload the dishwasher. Work on putting that cup up on the high shelf.' The game is sort of that stepping stone to get there."