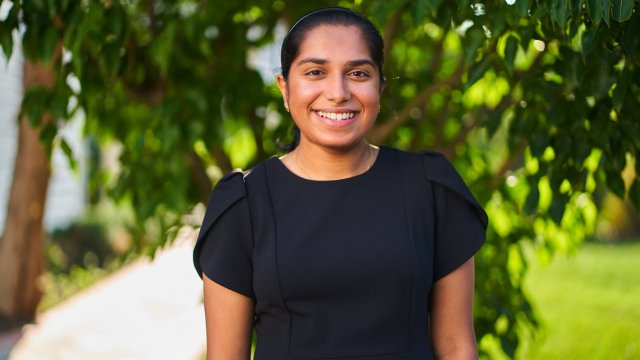 Receiving accurate information about the illness is challenging for non-English speakers. So multilingual people across the U.S. are offering a hand.

And immigrants make up a large share of this at-risk workforce.

Yet, for those who don't speak English, receiving accurate information about the coronavirus and the government's response can be especially challenging.

"Lack of access to information in one's own native language actually places these non-English speakers at a higher risk of infection," said Chandrashekar.

Chandrashekar lives in the Boston area, where she noticed some mobile clinics only had coronavirus handouts in English.

"They would have a lot of folks coming to them concerned about COVID-19, but they wouldn't be able to give their English fact sheets," she said.

In response, she enlisted a group of 175 medical students nationwide to translate coronavirus fact sheets in 37 languages.

"The response has been tremendous, really beyond anything that I could have expected. They've been included on some of the largest health organizations' websites. They've been sent out from hospital listservs; physical copies have been distributed to patients," Chandrashekar said.

Like Chandrashekar, a news anchor in Omaha, Nebraska, noticed that local immigrants were not receiving critical information such as park closures and social distancing guidelines. So, she started recording daily TV updates in Spanish.

"There's some people who have been like, 'Why are you guys doing this? They should know English.' The reality is that the United States is just so diverse. And we all have the same end goal. Practicing social distancing, staying safe, staying healthy," said Maya Saenz of KMTV 3 News Now.

"We know that people in immigrant communities live in more cramped households. Thus, the threat of spread is even greater among them, and they need to be reached as soon as possible for a successful public health response," García said.

The White House told Newsy that it's working closely with Univision and Telemundo to have Dr. Anthony Fauci and other coronavirus task force leaders appear regularly on both networks to inform the Hispanic community.

Some federal agencies and local governments provide safety guidance in Spanish and other popular languages. But because Latinos and other immigrant groups are disproportionately hit by the virus, private citizens are working around the clock to close the gap.