Meet Kurt Volker, One Of The Witnesses In The Impeachment Inquiry 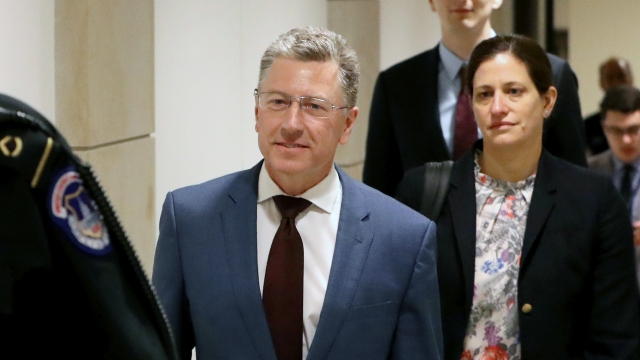 The former U.S. special envoy to Ukraine resigned from his role after he was named in the anonymous whistleblower complaint.

Volker is a longtime diplomat. After getting his master's degree in international affairs from George Washington University, he worked as a CIA analyst.

He then turned towards foreign policy. After joining the State Department as a foreign service officer, Volker later served as a director on the White House national security council and as the U.S. ambassador to NATO.

Volker entered the private sector in 2009. But he returned to government work years later when then-Secretary of State Rex Tillerson appointed him to the Ukraine envoy position in 2017.

Volker resigned in September after the anonymous whistleblower's complaint said Volker provided advice to Ukrainian leaders to help them "'navigate' the demands" President Trump had made.

During his closed-door deposition in October, Volker told House lawmakers his efforts were "entirely focused on advancing U.S. foreign policy goals with respect to Ukraine." But he called President Trump's personal lawyer Rudy Giuliani a problem, saying, "he was amplifying a negative narrative about Ukraine."

Volker also stressed that he didn't know about or participate in an effort to get Ukraine to investigate former Vice President Joe Biden. He added that he thought the decision to withhold military aid from Ukraine was "problematic" and that he argued it should be reversed.

But Volker denied that President Trump tried to use the military aid as a bargaining chip, since Ukrainian officials didn't become aware of the freeze in assistance until weeks after the president asked them to look into Biden's son. Because of that, Volker told lawmakers, "there was no leverage implied" by President Trump's request.