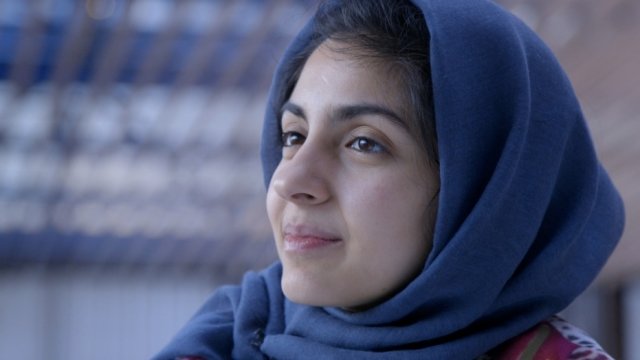 Hoda Katebi is many things: Muslim fashion blogger is just one of them.

"Fashion was never not political for me," blogger Hoda Katebi said.

And with an army of over 12,000 followers on Instagram, she wants to change the fashion industry.

"I also wanted to normalize the hijab and normalize this image of just a powerful girl walking around in whatever the hell she wanted," Katebi said. "So, that was sort of an intention going into this blog."

How Fashion Can Be A Political Statement Of Inclusion

LGBTQ people and those with disabilities are often ignored by mainstream fashion, but this designer creates bold lingerie that celebrates all forms.

Katebi runs the blog JooJoo Azad — a Farsi phrase that roughly translates to "free bird." Katebi is Iranian-American, and she says Farsi is an important element in her identity and work.

"This like breaks almost every rule of branding because it's in a different language, it's hard to spell, there's many spellings of it, the meaning doesn't really tell people about what I do, ... [but] people have to constantly speak Farsi if they want to talk about my work," Katebi said.

Katebi's work has evolved since she launched the blog in 2013, but her core mission has stayed the same. She wants to turn readers' perceptions on their heads — whether that's questioning labor practices and fast fashion, misconceptions of Islam or exclusion in feminism.

"Refugee and Muslims right now, for me as a blogger who is also getting pitched by brands all the time, feels that my identity has become like this trend that people are trying to commodify," Katebi said. "So pitches before used to really talk about the work I did, my mission and my values and from that angle, they wanted to work with me. But now, a lot of brands literally are telling me that my identity is trending, and that's why they want to work with me."

She recently got attention when she published a photo book of Iran's underground fashion and design scene.

"Tehran Streetstyle wasn't my intentional project going into Iran," Katebi said. "I was really there to do research for my thesis, but it kind of happened just in conversations with a lot of the designers that I was having. I was interviewing them and kind of asking them and seeing what they wanted after all the time that they had spent interviewing with me and realizing that there isn't enough media that is celebrating Iranian culture and the work that they're doing, but rather it's always bent on challenging this or showing this."

"Watching people flip through my book, both Iranians who haven't been to Iran for a very long time and people who had never been there before, just I feel like people have a very emotional reaction to the book, and that kind of caught me off guard," Katebi said. "This book is really for me, marks a shift in my work and is aimed to celebrate what's happening in Iran and is showing the beautiful diversity and multivariance of culture and clothing and the way people are expressing themselves in Tehran, but also to challenge government dress codes."

So what's next for Katebi? A lot, actually. She's working on her own fashion line; she plans to create a refugee cooperative in Chicago to help sew the pieces.

"I think we're so detached from our clothes, and yet it's so intimately connected to our bodies ...," she said. "My clothing line is going to be a genderless clothing line that kind of explores gender and femininity through Islamic architecture in Iran that's also ethically made. It's not just an end product; it's not just a beautiful piece of clothing. It's also uplifting the labor. For me, I really want us to look at fashion in a different way and less of 'I want to buy this because it's on sale' but more that 'I want to purchase this piece knowing exactly where it came from, knowing that I'm having a very minimal wardrobe in terms of quantity and this piece is going to inform about my personality and what I'm trying to express and the sort of ideas that I have.'"