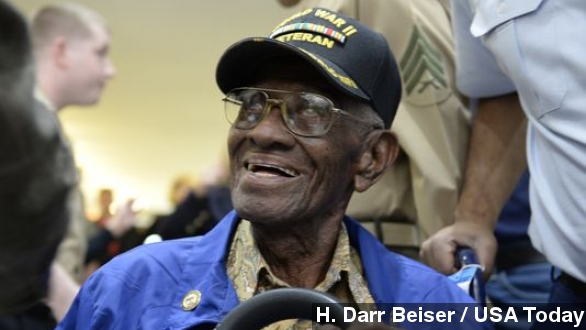 Richard Overton is believed to be the oldest living World War II veteran.

At 107 years old, he got an enthusiastic reception when he arrived in Washington, DC Sunday. USA Today was there.

OVERTON: "Well, I wasn't expecting this kind of crowd."

This Veterans Day will be extra special for Overton — he started the day with breakfast at the White House with President Obama. (Via KHOU)

It's been 70 years since he came home from the Pacific, and Monday the President Obama honored the Austin native in his Monday afternoon remarks. (Via WYFF)

OBAMA: "We are honored that he's here with us today. Let's ask Richard to stand again, because he can stand." (APPLAUSE) (Via MSNBC)

Overton volunteered to serve in 1942. He was a member of the 188th Aviation engineer Battalion as part of an all-black unit. (Via Fox News)

Earlier this year he met Texas Governor Rick Perry — and was actually pretty chill about it. (Via KTBC)

REPORTER: "Are you excited about meeting the governor?"

He told USA Today he puts a tablespoon of whiskey in his coffee evey morning — and smokes a dozen cigars a day.

We don't recommend it — but it obviously works for Overton.