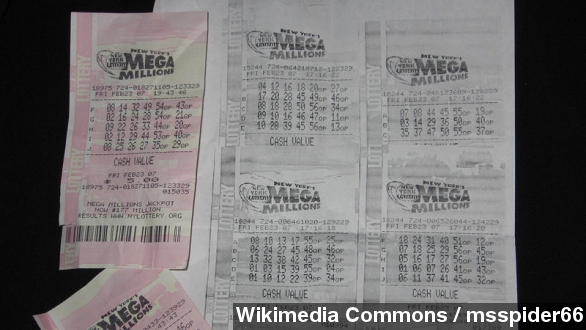 The Mega Millions jackpot is well on its way to breaking a U.S. lottery record. It's ballooned to $586 million before Tuesday's drawing.

The Mega Millions jackpot is well on its way to breaking a U.S. lottery record, reaching a whopping $586 million before Tuesday's drawing.

Because no winner was selected Friday, the prize money grew to $550 million. And once lotto players saw that high number, they rushed to buy tickets, pushing that number up another $36 million. (Via WRC-TV)

And the total could easily go up again before those six winning numbers are chosen on Tuesday.

The lead director for Mega Millions says ticket sales are already past what was originally projected for Tuesday's highly anticipated drawing. (Via WPVI)

And if history repeats itself and no winner is chosen, lottery officials say the payout could soar past the current record of $656 million — and could even reach $1 billion by Christmas if no one wins before then.

If this jackpot's history is any indication, the prize might just do exactly that. The first drawing was on Oct. 4 for $12 million, and since then, 21 straight drawings haven't produced a jackpot winner. (Via Mega Millions)

But we might not be able to blame it all on luck.

According to USA Today, back in October, Mega Millions made some changes to the rules for how numbers are drawn and set a minimum jackpot of $15 million.

With this new structure, players have a better chance of winning a prize, but it's even harder to win the entire jackpot. And that leads to jackpots getting bigger and bigger the longer no one wins the big prize.

So what are your odds of striking it rich Tuesday? CNN reports you're much, much more likely to be killed by an asteroid, if that gives you an idea.