A Megadrought Is Killing Protected Elk In California 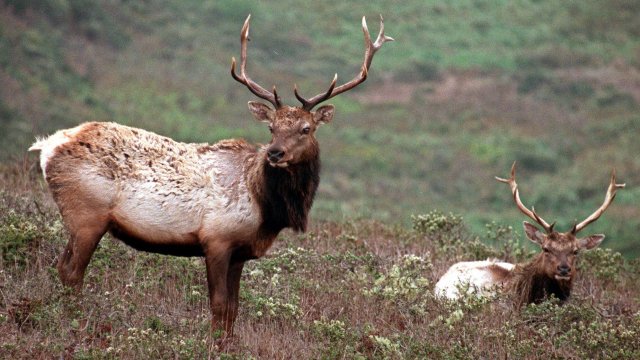 Some volunteers took helping a federally protected species into their own hands by carrying water to elk dying of thirst.

On a bone-dry, windswept northern California coastal grassland, a tule elk bull stakes out his turf, bugling for a female. It's the height of mating season.

For 40 years the species has thrived on protected federal land — the Point Reyes National Seashore — but now part of their herd is disappearing.

"So it's a drought-stricken reserve that they've trapped half of the animals in there, about 600 elk in the park, about 300 inside the so-called Tule Elk Reserve. And there's not enough food or water in the reserve," said Jack Gescheidt with Tree Spirit Project.

They're dying of thirst. The West is caught in a megadrought. There's not enough rain or snow melt to feed the aquifer and fill the elk's watering holes, nor make pastures verdant.

"Well, the thing about the tule elk is they're what we call keystone species — they evolve with the native landscape — and so they are instrumental in the main maintenance and also the restoration of the native landscape," biologist Julie Phillips said.

Even these resilient elk, whose adaptations allow their bodies to wring moisture from the driest vegetation, are in decline.

"The numbers we've been throwing around is 406 elk have died by the Park Service's own count in the last decade — 152 of those elk just last year," Gescheidt said.

Gescheidt, a local photographer and animal rights activist, has called attention to the plight of the elk.

Dozens gathered at the Seashore's park to rally in defense of the elk in September.

Extreme summer temperatures and extreme changes led Gescheidt to do something extreme himself. He organized dozens to hand-carry water to the dehydrated elk.

"There are too many hot days; the soil gets baked like that, and all these problems are the reservoirs," he said. "I've never seen them so low. I've lived around here for 20 years. I've never seen reservoir so low, and the ponds in the park that the elk drink from completely dried up."

The elk are fenced in on the Tomales Point section, so they can't access other water sources. The division exists because dairy farmers and ranchers operate and have grazing rights on the other side, which are leased out by the National Park Service.

The activists want a fence that divides the Point Reyes National Seashore gone. On one side there are dairy operations with ample access to water. On the other, the elk are cut off from water and are dying of thirst.

"The elk shouldn't be that way," Gescheidt said. "They shouldn't be starved. They should be free to walk over to where there is just 100 acres away, plenty of food and water."

Gescheidt is a plaintiff in a lawsuit to remove the fence and change the park's management plan.

"The Park Service has known that the tule elk, who live at Tomales Point, have been dying horrific and preventable deaths for years," said Kate Barnekow with Harvard Animal Law & Policy Program. "Our plaintiffs have told them, the public at large has told them and they have failed to take any action."

The National Park Service declined to speak on camera because of the ongoing litigation but says it's installed water tanks to help the herd.

"But we, humanity, are heating the water that we're in, raising it to a boil, and we don't know how to get out or we don't want to get out," Gescheidt said.

Activists say the fence is still in the way and that the drought and die-offs should also raise another question: Rancher access to land reserved for the wild.