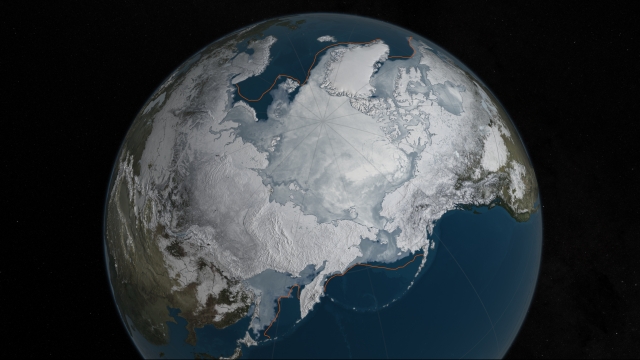 As more freshwater flows into the Atlantic Ocean, it weakens the Gulf Stream, and that could be bad news for the global climate.

Our planet's climate follows a "seesaw pattern" of warming and cooling. But a new study says that pattern is being disrupted.

In this system, freshwater from the Antarctic and Greenland ice sheets flows into the Atlantic Ocean, cooling the water. The cooler water is more dense, and it sinks and flows south. Warm water from the Southern Hemisphere flows northward, creating the Gulf Stream current.

Researchers studied an ice core from the East Antarctic ice sheet that gave them 720,000 years of climate data. They found the Gulf Stream weakens as more freshwater flows into the Atlantic Ocean, which could have severe effects on the global climate.

Climate Change Is Freaking People Out Enough To Not Want Kids

Rising temperatures are one of the reasons.

According to the National Oceanic and Atmospheric Administration, a weakened Gulf Stream could influence rainfall patterns and temperatures over North America and Western Europe.

And while some researchers study a weakened Gulf Stream, others are trying to predict when it might collapse. In a 2016 study, researchers said it could happen in 300 years if carbon-dioxide levels in the atmosphere doubled. Other scientists agree a collapse might be here sooner than we think, especially as the Greenland and Antarctic ice sheets shrink.

Scientists are working on better ways to measure ice sheet melt. NASA researchers built a map that shows what parts of the Greenland sheet are thawed. Knowing whether that ice rests on wet ground or dry, frozen bedrock is key to predicting how this ice will flow in the future — and how our planet will fare in the face of climate change.