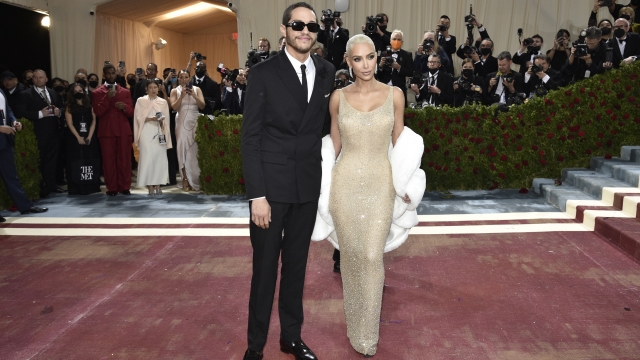 Kardashian had to lose 16 pounds to fit into the dress, designed by Jean Louis and purchased in 2016 by the Ripley's Believe or Not! museum in Orlando, Florida, for a whopping $4.81 million.

"It was such a challenge," she said. "I was determined to fit it."

The dress originally cost $12,000. It was so tight Monroe had to be sewn into it when she purred "Happy birthday, Mr. president" on May 19, 1962, at a Madison Square Garden fundraiser. She died three months later. It has been known as the "Happy Birthday, Mr. President" dress ever since.

Kardashian, with boyfriend Pete Davidson at her side, paired the dress with Cartier white gold drop diamond earrings and a furry white jacket she kept strategically low to cover her backside. Her hair was platinum and pulled tightly into a bun. But she only wore the fragile original dress for her walk up the Grand Staircase at the Metropolitan Museum of Art, changing into a replica after that, according to Vogue.

Earlier, Blake Lively smiled for the cameras in a grand Atelier Versace gown, with husband Ryan Reynolds in brown velvet, Billie Eilish went with an upcycled green lace-trim dress from Gucci and Cynthia Erivo wore sheer white Louis Vuitton with a matching head piece as the Met Gala returned to its berth on the first Monday in May after years of pandemic upheaval.

The celebration of American design was themed to gilded glamour, sprouting classic black tailed tuxedos for many of the men and lots of dresses in black and white for the women. Others paid literal homage to New York City, home base for the Gilded Age, and still more shimmered in metallic golds and silver.

"Black and white are THE colors for the evening," said Holly Katz, a stylist and host of the Fashion Crimes podcast.

Lively, one of the evening's co-hosts, wore a bronze and rose gold look that transformed into a shimmery layer of baby blue as a large bow was pulled. Her look drew inspiration from the Statue of Liberty, the Empire State Building and the blue ceiling of Grand Central Station.

"Instead of looking to fashion to influence the dress, I looked to New York City architecture," Lively said.

Cardi B, accompanied by Donatella Versace, was an over-the-top golden goddess in a dress of mesh and chains, a fitting birthday for the designer.

Gigi Hadid was more redefined cat woman than golden girl. She wore a tight-as-skin, blood red Latex catsuit with a corseted bodice and huge, heavy quilted coat from Versace. She walked gingerly up the steps.

Lizzo, meanwhile, got the crowd cheering when she played her gold flute for fans watching the parade of fashion outside. She wore a black dress under a stunning gold-embroidered black coat, all by Thom Browne.

Camila Cabello worked a huge white gown with a midriff top, from Prabal Gurung, while Jordan Roth, the theater producer, provided a reveal of his own, removing a black, egg-like shell to a matching bulbous suit, all by Thom Browne. Janelle Monáe offered a royal wave in a black and white bedazzled helmet piece and slinky gown with head piece.

New York Mayor Eric Adams put politics front and center in a tux emblazoned with "End Gun Violence" on the back. Former presidential candidate Hillary Rodham Clinton was in a Bordeaux-colored gown designed by Joseph Altuzarra with the names of historic women sewn into the hem and neckline. They include Abigail Adams, Shirley Chisolm and Madeleine Albright.

Clinton's last Met Gala was a while ago.

Vogue livestream co-host Vanessa Hudgens made her way up the steps in a vaguely Victorian black sheer lace gown with a long train by Moschino. She was joined by La La Anthony, her fellow Vogue host who wore a deep red look with cut out shoulders from LaQuan Smith.

Anthony said: "Those stairs are intimidating."

And if the Met Gala's return feels like one of those what, already moments, it is.

It's been just under eight months since the last gala, an annual fundraiser that raises eight-figure sums for the Met's Costume Institute. More than $16.4 million was raised last year. The starry event is the institute's primary budget feeder.

This year's gala coincides with the opening of the second part of a two-part exhibit at the Costume Institute focused on American fashion and style. The evening's dress code was gilded glamour and white tie, a la the Gilded Age, that tumultuous period between the Civil War and the turn of the 20th century known for its robber barons, drama and grandeur.

Some of the stars included extra touches. Gabrielle Union said the red jewels in her hair to go with her silver Versace dress represented the blood shed by people of color during the Gilded Age. The dress included a large red flower embellishment at the waist.

Vogue's Anna Wintour, who has run the gala since 1995, wore feathery Chanel and a jeweled tiara that has been in her family since 1910. She continues as one of the night's honorary co-chairs, along with designer Tom Ford and Instagram's Adam Mosseri. The other official co-chairs for 2022 are Regina King and Lin-Manuel Miranda.

Eilish wore a custom Gucci corset look of ivory and duchesse satin with green lace and a padded bustle. Erivo's look came with a large train as she held hands with Sarah Jessica Parker, who wore custom Christopher John Rogers, a white and black striped Cinderella ballgown with a towering pink and black feather head piece by Philip Treacy.

Parker's dress was inspired by the work of Elizabeth Hobbs Keckley, the first Black female fashion designer in the White House, a confidante of first lady Mary Todd Lincoln.

Keys said her dress was meant to "represent an empire state of mind and a city of gods here tonight."

Twitter's new owner, Elon Musk, showed up with his mother, Maye Musk a former model adorned in Chopard pearls and other jewels. Her son went with a classic tux with tails.

Ariana DeBose was resplendent in golden Moschino by Jeremy Scott.

"This guy turned me into a fashion Oscar," she said.

And the gala included a marriage proposal. Former state Assembly candidate Bobby Digi Olisa got down on one knee to pop the question to a stunned Laurie Cumbo, the city's commissioner of cultural affairs.

What's a Met Gala without more than one Kardashian, or six. The entire family showed up, including Kylie Jenner in a white ballgown with a matching hat and big sister Kourtney Kardashian in deconstructed Thom Browne to go with beaux Travis Barker's Thom Browne suit. Kendall Jenner was in black Prada as she played "devil and angel" with Kylie. Sister Khloe Kardashian was in gold Moschino and matriarch Kris Jenner wore canary yellow from Oscar de la Renta, an ode to Jackie Kennedy Onassis — her hair in a '60s flip.

Katy Perry, usually a showstopper as a cheeseburger and other wacky looks over the years, donned understated Oscar de la Renta this time around.

Teyana Taylor wasn't quite on theme but her dramatic Iris Van Herpen gown certainly made a statement, said Claire Sulmers, a fashion writer and pop culture observer who writes The State of Fashion column on Meta's publishing platform Bulletin. It was a breathtaking purple worn with a metal, cage-like piece around her head and face.

"The drama and metallic adornment certainly made her one of the best dressed of the night," Sulmers said.

"Many of the best looks were the most straightforward ones. Kate Moss in a velvet Le Smoking Tuxedo gown, Hailey Bieber in slinky ice-colored silk and marabou feathers, for example. They were both in Saint Laurent, which is of course not an American brand, but the simplicity and directness of their beauty and allure was extraordinarily, well, patriotic," she said.

Todd Snyder, the New York-based designer, appreciated many of the night's interpretations on the white tie dress code.

"Seeing how people pushed beyond the expected interpretation was refreshing this year. I loved Austin Butler in custom Prada swapping the classic bow tie for a silk scarf over a cropped tux jacket. Ryan Reynolds and Rege Jean Page reminded us of the elegance of velvet in a tux. While the era from the outside was opulent, Riz Ahmed's statement of wearing a workwear inspired outfit to represent the immigrant workers that kept the Gilded Age going is a statement that must not be forgotten."