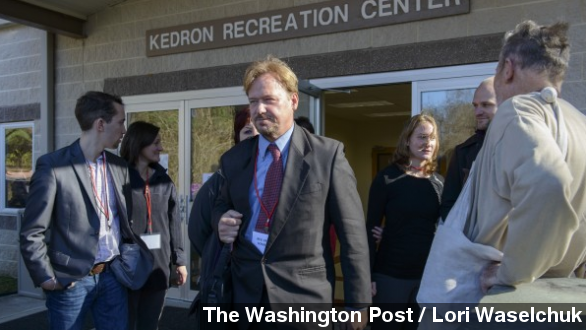 A United Methodist jury has convicted a pastor of violating church law when he officiated his son's gay marriage.

The verdict is in for a United Methodist pastor accused of breaking church law by officiating the same-sex wedding of his own son.

"I felt totally honored and I was full of joy … What is my crime? I blessed two people that love each other?" (Via ABC)

A jury of his church peers in Pennsylvania found Reverend Frank Schaefer guilty of breaking his vows when he performed his son’s marriage to another man in 2007. (Via CBS)

As the nation’s largest Protestant denomination, the United Methodist Church accepts gay members but regards homosexuality as “incompatible with church teachings.”  Here’s a spokesperson for the church. (Via PBS)

"We will continue to work together and pray. As the United Methodist church we seek greater understanding, even if we don’t agree." (Via WPVI)

Last April a parishioner filed a complaint against Schaefer. The Washington Post writes it "came after years of tension between older, more traditional members and the growing group of newcomers and younger Methodists who attended the contemporary service Schaefer created."

Schaefer told reporters he could have avoided the trial altogether by promising not to perform any more gay marriages — an offer he says he rejected because three of his four children are gay.

At the trial Schaefer conceded he was in violation of the church's Book of Discipline when he performed his son’s wedding but felt he was obeying God’s command to minister to everyone. After the verdict, his son offered this brief statement:  (Via WXTF)

"I’m obviously very saddened, so what we’re hoping for tomorrow is a light sentence." (Via WHP-TV)

The jury will meet Tuesday to determine Schaefer’s penalty. It could vary from a simple reprimand to losing his ministerial credentials.