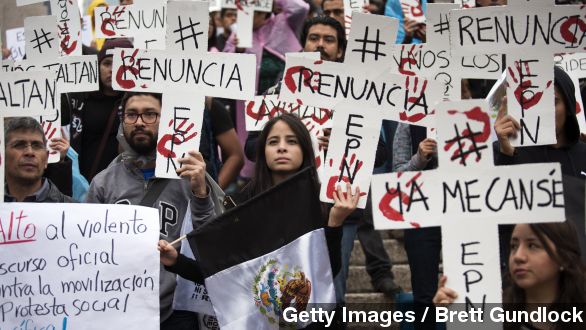 Protests in Mexico over the case of 43 missing students believed to be have been murdered escalated as protesters burned an effigy of the president.

Thousands took to the streets on the anniversary of Mexico's 1910 revolution not in celebration, but instead to protest how the country has handled the disappearance of 43 students earlier this year in September.

The students are believed to have been murdered after being kidnapped by police and gang members working under a corrupt mayor's orders in southern Mexico.

According to NBC, three marches earlier in the day had been peaceful. They later became more violent, including protestors burning an effigy of Mexico's President Enrique Pena Nieto.

Many are noting these latest protests are not only about people losing patience on the case of the missing students, but also a sign that Mexicans are tired of government corruption. (Video via YouTube / Fernando Pichardo)

Homero Aridjis, a Mexican poet and social activist, told the Los Angeles Times that "Mexicans are ready to explode" and that "Corruption has touched bottom, people are poor, suffering violence. They are fed up and desperate."

That perceived corruption was made worse when it was revealed early November that an opulent mansion used by President Pena Nieto, dubbed "The White House" was owned by a construction company that the government has given millions of dollars in contracts to.

Pena Nieto and his wife, who was in the process of buying the house, have since said they'd sell the house and issued an updated Declaration of Assets to assuage the notion he's corrupt. But so far it hasn't helped much.

An op-ed by The Washington Post editorial board says its up to Pena Nieto to resolve the situation, saying "He must respond to public revulsion over the missing 43 students by making sure that a complete and transparent investigation is carried out, not only into the perpetrators but also the structural and institutional ills that have brought Mexico to this point."

A senior fellow at the Council on Foreign Relations told Bloomberg that in the eight weeks since the disappearance of the 43 students, protests have been steadily increasing putting more pressure on Pena Nieto for reform.