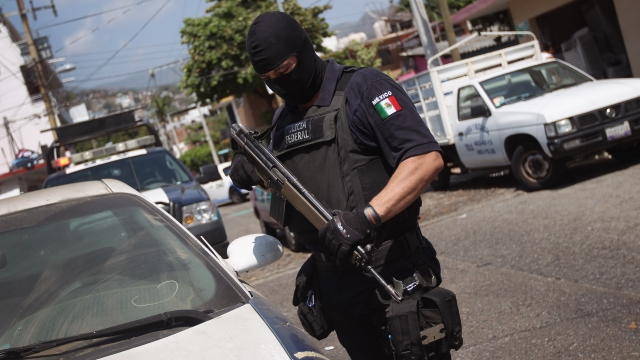 In back-to-pack explosions of violence, 13 Mexican police officers are killed in cartel ambush and 15 die in shootout between soldiers and gang.

On Monday, 13 police officers attempting to serve a warrant in the state of Michoacan were gunned down in an apparent ambush by more than 30 cartel assailants. They opened fire with automatic weapons and set the police convoy aflame.

On Tuesday, 15 people were killed in the neighboring coastal state of Guerrero in a gun battle between military troops and a suspected criminal gang. The dead included one soldier and 14 civilians.

Lopez Obrador had pledged to address the root causes for Mexico's spasms of violence. He promised to add jobs and increase opportunities for Mexican citizens, while attacking drug use and addiction fueling rising street crime.

Since then, 250,000 people have been killed in Mexico, overwhelmingly due to drug crime and, some analysts argue, the government's efforts to combat it.

After Monday's ambush on police, Mexico dispatched 80 troops and an Army helicopter to the Michoacan region. Lopez Obrador insisted he isn't launching a military campaign to meet violence with more violence.

The Michoacan attack was blamed on a fast emerging, exceptionally violent cartel known as Nueva Generación - or New Generation. It seized power after Mexican drug lord Joaquín "El Chapo" Guzmán of the Sinaloa Cartel was extradited for trial in the U.S.

Last year, Mexico suffered a record 33,749 murders as drug cartels fought over smuggling routes to the U.S. and also accelerated street sales in Mexico of methamphetamine and a synthetic opioid, Fentanyl. There were 23,000 more homicides by August of this year.