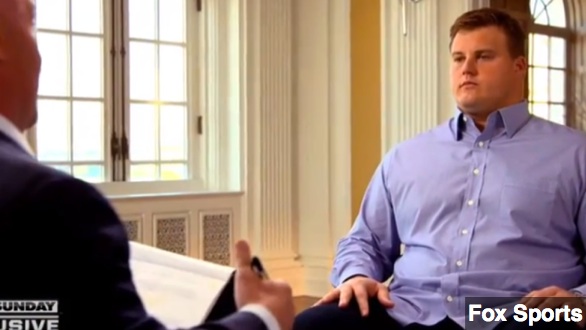 Richie Incognito of the Miami Dolphins is defending himself from reports he bullied teammate Jonathan Martin, saying he and Martin are actually good friends.

In an exclusive interview Sunday with Fox Sports' Jay Glazer, Incognito said some of his actions were wrong but that many of the media reports were untrue.

According to Incognito, Martin sent these texts days after he left the team, saying it wasn't Incognito's fault Martin left — instead blaming football and the locker room culture. (Via Twitter / @NFLonFox)

Martin left the team at the end of October, reportedly after a team cafeteria prank on him. (Via Sun-Sentinel)

Media outlets report Incognito was the main harasser of Martin and that he sent Martin threatening texts and voice mails, including this one. (Via NESN)

"In it, Incognito reportedly uses expletives and racial slurs toward Martin and ends by saying, 'I'm going to slap your real mother across the face. F- you. You're still a rookie. I will kill you.'" (Via WJLA)

Incognito says the voice mail was made as a joke between two friends. In fact, Incognito says he received jokingly threatening texts from Martin, too, including one from Martin saying, "I will murder your whole f—-ing family." (Via New York Daily News)

Incognito has been suspended indefinitely from the team as a result of the scandal, and a report from NFL Network says Dolphins head coach Joe Philbin and General Manager Jeff Ireland could also be on the chopping block.

Incognito is a free agent after the season. Martin is still away from the team, and there's currently no timetable for him to return. The NFL Players Association is investigating the case.