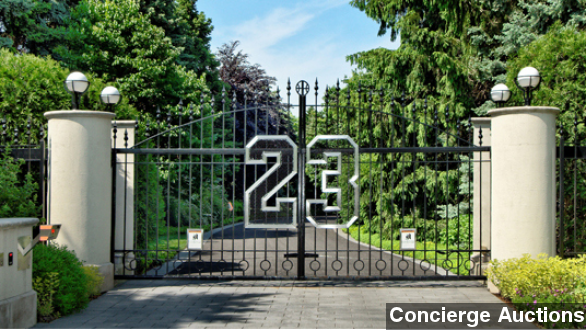 Air Jordan's basketball game may be legendary, but his real estate game? Not so much.

Michael Jordan's basketball game may be legendary, but his real estate game? Not so much.

The six-time NBA champion failed once again to sell his 56,000-sq. ft. Chicago mansion. This time at an auction where zero bids met the $13 million starting price. (Via Concierge Auctions )

Air Jordan's former home has nine bedrooms, 15 baths, a 14-car garage and a full-sized NBA basketball court among other things. Not to mention the property sits on more than seven acres of land just north of the city. (Via CNN)

The home has reportedly been on the market for more than two years. Jordan's original asking price was $29 million, but he dropped that price down to $21 million after struggling to sell it. (Via Sports Illustrated)

Even after cutting the original asking price by $8 million he was still unable to find any takers.

So he took it to Concierge Auctions, which specializes in selling unique high-priced properties. Even though potential bidders had to place a $250,000 bond just for the opportunity to bid on Jordan's house, no one actually did.

Jordan says he wants to part ways with the highly customized property because his children are all grown up, so he doesn't need a home of that size in Chicago.

Especially after he just moved into an absolutely gigantic home in Florida about a year ago. That home is also equipped with a NBA-sized basketball court. (Via Yahoo! Sports)

CNN Money says it probably wouldn't hurt Jordan too much to just take a loss on his Chicago home.

"He was the most marketable athlete ever during his playing days, and still has lucrative deals with ... Gatorade, Hanes, and Nike. He also owns a motor-sports team, several restaurants, and a majority share of the NBA's Charlotte Bobcats."

And according to Forbes, Jordan still brings in around $80 million and year, with his total net worth estimated at around $650 million.

Realtors say that in the current market, homes of more than $3 million are pretty tough to sell right now. Jordan moved into the home in 1994, just after the Bulls' first three-peat. Concierge and Jordan say they will reevaluate their options for the property in 2014.