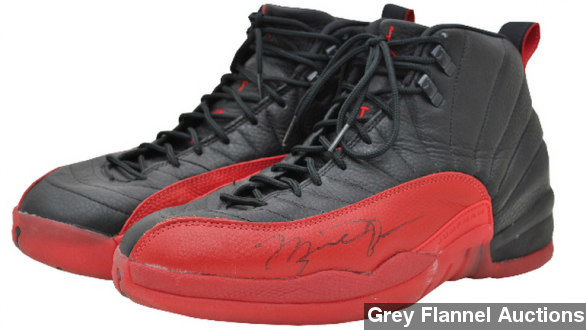 A hundred thousand dollars for a pair of sneakers — no, it's not the newest high-end offering from Nike, but it is a piece from the storied history of the brand and its most notable spokesperson.

It's a pair of Air Jordans worn by "His Airness" himself in what is now known in NBA lore as the "Flu Game." (Via Fox Sports)

That was Game 5 of the 1997 NBA finals. Jordan was, by all accounts, feeling under the weather but still managed to pour in 38 points in a Bulls win over the Utah Jazz. (Via NBA)

It was a performance so impressive it was even immortalized in its own Gatorade commercial.

ANNOUNCER: "He is suffering from flu-like symptoms."

PHIL JACKSON: "We had to help him into the locker room. It made me a believer." (Via Gatorade)

After the game, the shoes fell into the hands of then 18-year-old ball boy Preston Truman, who had reportedly developed a friendship with Jordan after delivering applesauce to him earlier in the 1996-97 season. (Via YouTube / TYT Sports)

"I kind of leaned into him and said, 'Are you doing anything with your kicks after the game?' He kind of looked up at me and said, 'Why? Do you want them?' And I was like, 'Absolutely! That'd be awesome. I'd be honored.' And he said, 'Good. They're yours.'" (Via ESPN)

Jordan signed the shoes for Truman after the game, and once in his possession, they reportedly sat in a safe deposit box for years before Truman was ready to part with them. (Via NBC)

The six-figure sum reportedly broke the previous highest price paid for a pair of Jordan kicks — surpassing the $31,000 paid for a pair he wore in his rookie season last month. And it's a lot more than the $11,000 Truman had reportedly been offered in the past. (Via Kicks)

Truman says he doesn't have any wild plans for the newly acquired money — just car payments and college tuition for his kids.

But he does have another source of income to fall back on, should he ever need it. He reportedly owns another pair of shoes Jordan wore in the 1998 NBA finals. (Via Sports Illustrated)