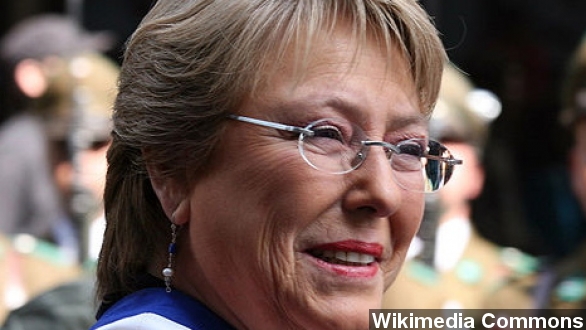 ​Michelle Bachelet has retaken Chile’s presidency after an easy victory against her conservative opponent Evelyn Matthei.

Bachelet, a socialist, was Chile’s first female president from 2006 to 2010. The country’s electoral laws kept her from running for an immediate second term. (Via BBC)

Just last month Bachelet narrowly missed a victory in the country’s first round of elections. The country’s constitution requires candidates to gain more than 50 percent of the vote to win without a runoff. (Via The Economist)

This time around it was smooth sailing for Bachelet, who won more than 60 percent of the vote.

It wasn’t exactly a nail biter leading up to election day. Bachelet was a strong favorite to win. She enjoyed a high approval ratings during her first term and has remained active in the country and the United Nations. (Via Deutsche Welle)

Her goal to raise corporate taxes to fund free university education in the country received wide support. Bachelet says she hopes to close the gap between the rich and poor in the country. (Via Los Angeles Times)

Bachelet and her opponent Matthei have a long history, dating back to when they were just playmates on a military base. The infamous 1973 military coup wound up pitting their families against one another. (Via The Telegraph)

Matthei’s father aligned with Augusto Pinochet’s junta, while Bachelet’s father was tortured to death for refusing to support the General. (Via The Guardian)

But the two presidential candidates remained cordial throughout the race. The biggest attacks from Matthei against Bachelet were over how Bachelet handled the 2010 earthquake. (Via Al Jazeera)

Bachelet is the first leader in Chile to serve two terms since General Pinochet.