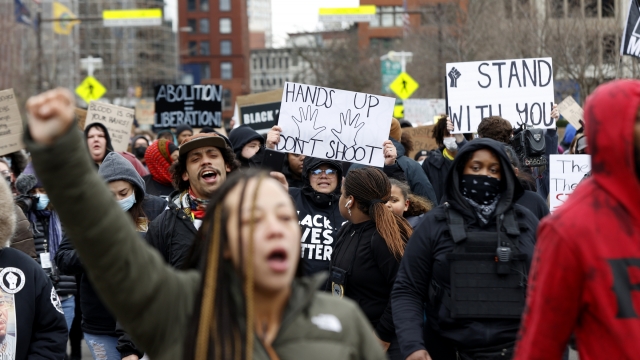 The Michigan police officer who killed Patrick Lyoya with a shot to the head has been with the Grand Rapids department for seven years, after starring as a pole vaulter at a small college and marrying his longtime girlfriend during a church mission trip to Africa.

Christopher Schurr’s name had been circulating since his face was seen in videos of the April 4 confrontation with Lyoya, a Black man. But his identity wasn’t publicly acknowledged until Monday when the police chief changed course and released it, three days after passionate demands at the funeral of the 26-year-old native of Congo.

Chief Eric Winstrom said he was acting “in the interest of transparency, to reduce ongoing speculation, and to avoid any further confusion," though no other information about Schurr's service with the department was released.

Lyoya, who was unarmed, was face down on the ground when he was shot in the back of the head, moments after a traffic stop in Michigan's second-largest city. Schurr was on top of him and can be heard on video demanding that he take his hand off the white officer’s Taser.

A forensic pathologist who conducted an autopsy at the family’s request said the gun was pressed to Lyoya’s head when he was shot.

Schurr, 31, grew up in Byron Center, just south of Grand Rapids, and joined the police in 2015 after attending Siena Heights University in Adrian, Michigan.

The police department's decision to reveal Schurr's name was a reversal. After the release of video of the shooting, Winstrom insisted he would withhold the officer’s name unless he was charged with a crime. It was described as a long-standing practice that applied to the public as well as city employees.

But Lyoya's family and Black leaders, including the Rev. Al Sharpton, repeatedly pressed for it, including at Lyoya's funeral, which drew 1,000 people Friday.

After Lyoya's funeral, Grand Rapids City Manager Mark Washington acknowledged the demand for the officer's name and said he would discuss the matter with Winstrom and city employment officials.