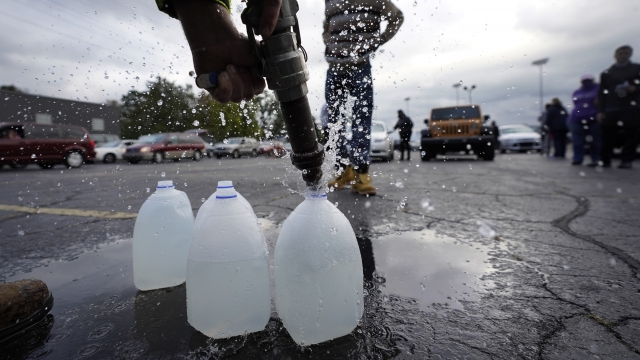 Aging infrastructure in Benton Harbor, Michigan, has caused residents to line up to pick up bottled water from distribution sites every week.

Residents of Benton Harbor, Michigan, all have a similar question.

"I wonder how much I've taken in already, as far as lead and stuff like that," resident Trinerty Thompson said.

Since the end of September, people in the predominately Black community in southwestern Michigan have been lining up on a weekly basis to pick up bottled water at distribution sites around town. This came after residents had finally put enough pressure on state and local officials to start addressing water tests from three years earlier that had found alarmingly high levels of lead in the town's water.

Lead exposure has been shown to contribute to heart disease and kidney failure, and in children, it's been connected to learning disabilities and impulse-control issues.

For almost two months now, Sandra Ray says she's been coming by water distribution sites in order to take care of the six people and two dogs in her house.

Even though residents weren't advised by state health officials to stop drinking and cooking with the water coming out of their taps at the end of September, Eugene Branch says he's been avoiding the water for years.

"I've been going out to a spring out on M-140 and getting water," Branch said.

It's going to cost around $30 million to replace all of the confirmed or assumed lead service lines in Benton Harbor.

Kim Smith Oldham and her team at the Southwest Michigan Community Action Agency have been one of a handful of agencies working to distribute clean water. The state has also given out water filters to residents, and home deliveries are being made for those who can't physically make it to the distribution sites.

"There have been 135 cases that have been given out since we started," Oldham said. "At first we were the boots on the ground, and then it grew from there. We partnered with the Department of Health and Human Services, the city of Benton Harbor, and also Southwest Michigan United Way and they get our volunteers."

She says this is a new kind of need for this community.

"This is what we do, I mean, we distribute food and commodities, so it was just a shift, but a bigger shift," Oldham said. "We ended up getting another part of a warehouse so we could hold the water."

Even though the state has pledged to have all the lead pipes replaced in Benton Harbor within the next 18 months, residents picking up water now say they're not convinced.

Earlier this month, the town saw a welcome sight as crews began to dig up and replace some of the pipes, but it's not a quick-fix solution, given that many folks say they'll likely have to cook Thanksgiving dinner with bottled water.

"I guess I'll have to use my spring water and my bottled water," Branch said.

"I just wish it didn't have to take so long, but you know, what can you say?" Ray said. "It's got to get done, and it'll be better for everybody."

So for now, the pickups will continue until distribution teams say they are no longer needed.