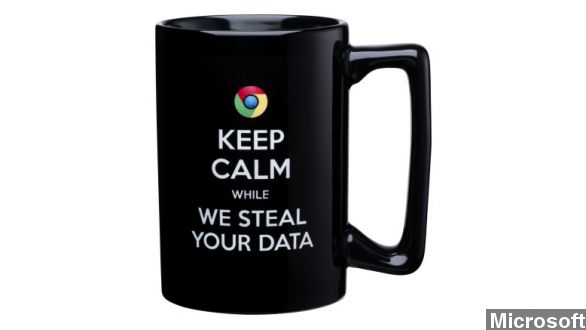 Microsoft has released a new line of merchandise slamming Google for its role in the National Security Agency's surveillance programs.

Microsoft has a brand-new lineup of merchandise in its company store — just in time for the holidays. But these products have more Ebenezer Scrooge than Kris Kringle in them.

Microsoft's new hats, T-shirts, and coffee mugs all have a common theme: slamming Google for its role in the National Security Agency's surveillance programs.

Unfortunately, the new campaign hasn't been well received around the Web.​ A Slate writer says anti-Google products make Microsoft seem like a sore loser. "In the corporate world, unfortunately, the moral high ground tends to be a little like a 'moral victory' in sports—it's what you settle for when you can't capture the actual high ground."

And a spokesman for the Electronic Frontier Foundation points out Microsoft can't take the moral high ground on this issue — the company was just as complicit in sharing user data with the NSA as Google was.

"It's difficult for a company like Microsoft to say that the way they're doing it respects your autonomy more. ... The point stands if it's not being comparative. ... It's just not necessarily better if you switch to Microsoft." (Via CNET)

Google isn't taking this attack lying down. A spokesperson for the company told the Los Angeles Times, "Microsoft's latest venture comes as no surprise; competition in the wearables space really is heating up."

That's a reference to the growing number of wearable computing devices hitting the market. Google is leading the field with its Glass device, while Microsoft ... has some T-shirts and a mug.

But despite the backlash, a writer for BetaNews says Microsoft's Scroogled campaign has already accomplished its goal: getting attention.

"Microsoft rarely gets such viral uptake, and any advertising consultant will tell you that all news is good news. Controversy is sweet marketing, and here pointed."

And it seems Microsoft's struck a chord with some people. At time of writing, the coffee mug and a couple of T-shirt styles were already out of stock.