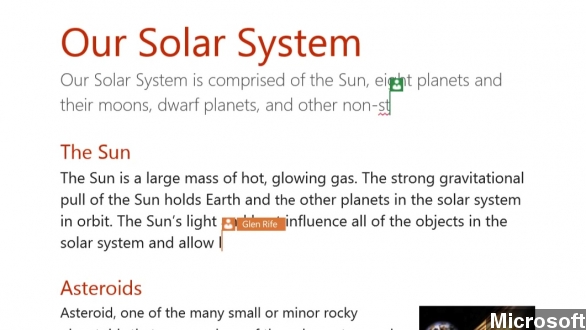 Microsoft introduces a live editing option to its suite of online apps, Office 365. The co-authoring tool is available for the online versions of Word, Excel, and PowerPoint.

Microsoft continues to play "catch up" with rival document editors. On Wednesday, it announced the addition of multi-author editing to its suite of online programs.

Microsoft first introduced its suite, Office 365 back in 2011, but only now will users have the ability to view the same document and contribute to "live editing." The feature is now available for the web versions of Microsoft Word, Excel and PowerPoint. In a blog post, Microsoft explains the benefits of what it calls "co-authoring." (Via Microsoft Office Blog)

"New real-time presence helps you see where your co-authors are working in the document so that you don't create conflicts as you edit … the new ability to see changes to text and formatting as they happen will help you and your co-authors stay on the same page as your ideas develop and evolve." (Via Microsoft Office Blog)

Co-authors will be shown in the document with different colored flags for each user as well as a list of users currently viewing the doc. Any offline editors using Office's desktop-app can edit documents and sync the changes the next time they're online. (Via Microsoft/YouTube)

Microsoft also wanted to spare its customers the agony of "remembering to hit save."  So, another noted feature added to 365 is continual autosave.  If you're thinking this all sounds a little familiar, you're right.

When it comes to online document collaboration, Google's suite of apps, including Google Docs, have become a household name. VentureBeat explains Microsoft's co-authoring and autosave abilities finally brings its apps to the same playing field Google services have been touting since 2010.

What's taken Microsoft so long to catch up to Google? CNET's Stephen Shankland says it might be a case of "old habits die hard."

"Office was born in an era when people stored documents on their PC's hard drives … sharing arrived awkwardly, with people exchanging documents by e-mail. Google Docs, in contrast, was born on the Web, where it made a lot more sense to have a single, centrally stored version of a document." (Via CNET)

However, despite its slow start, Microsoft retains an edge with its deep-seeded roots in the world of business.

While examining Microsoft Office 365, Technology Guide talks about "The Office Advantage." This refers to a company’s compatibility with an office and IT infrastructure already built around Microsoft products as well as the user familiarity with the product.

"If you had someone offer you a cloud service for $1.95 per month but it wasn't compatible with Office, you'd laugh. You have to have that data compatibility." (Via Technology Guide)

The next benchmark Microsoft is hoping to meet is expanding its suite of apps on mobile platforms. The programs have a limited presence on Apple's iOS devices and of course Windows Phone.

Back in May, the company promised Android users the ability to edit Office documents on their devices. The company says it's "still on track" to provide the functionality over the next several months. (Via Microsoft)