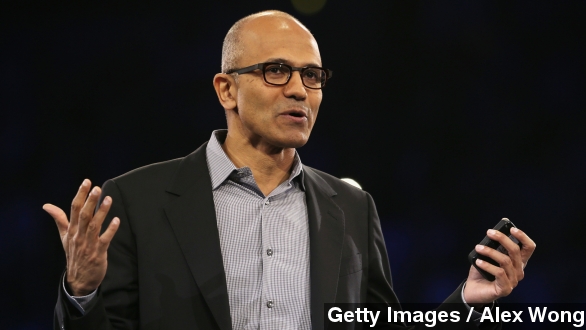 Microsoft CEO Satya Nadella, during the Grace Hopper Celebration of Women in Computing, gave perplexing advice to women looking to ask for a raise.

Microsoft CEO Satya Nadella is playing clean-up after advice he gave during the Grace Hopper Celebration of Women in Computing left audience members a little perplexed.

Nadella's advice to women looking for a raise was, in part, "It's not really about asking for the raise, but knowing and having faith that the system will actually give you the right raises as you go along. ... Because that's good karma, it'll come back."

A writer for ReadWrite said the comment had the audience murmuring and, of course, tweeting about Nadella's advice.

One audience member asked if the CEO was out of touch, and another said Nadella failed to give women practical advice on the topic.

Following his talk, Nadella tweeted out a clarification writing, "our industry must close gender pay gap so a raise is not needed because of a bias."

And that was followed by an email to all Microsoft employees, in which Nadella owned up to his ill-constructed advice.

"I answered that question completely wrong. Without a doubt I wholeheartedly support programs at Microsoft and in the industry that bring more women into technology and close the pay gap. ... If you think you deserve a raise, you should just ask."

Still, with many of the tech industry's biggest companies reporting mostly white, mostly male employee demographics, Nadella's advice was all the more perplexing.

Microsoft recently published its workforce demographics. As of September 30, the company's tech sector is just over 17 percent female. And its leadership percentage is just as low.

That, coupled with the ongoing wage gap — where women are earning 77 cents for every dollar earned by a man — likely brought Nadella's advice into the spotlight.

For his part, Nadella said he "learned a valuable lesson" speaking at the Grace Hopper Conference.