More Snow Could Make Midwest Flooding Easier To Deal With 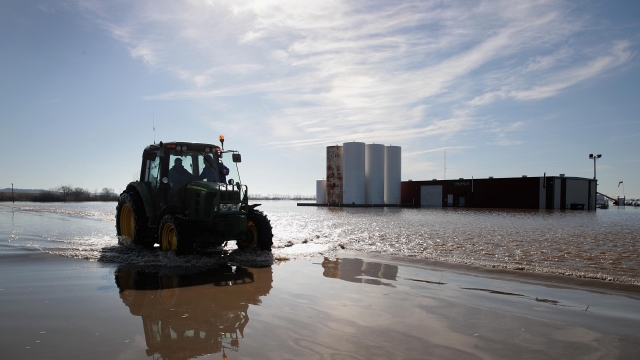 The newest batch of Midwest snow could improve some flood situations in the short term. Damage from floodwaters has already cost billions.

The Midwest and Great Plains are still dealing with the effects of March's historic floods, and now another winter storm has dumped even more snow and rain on top of these states. It may seem paradoxical, but the snow in particular might actually help manage flooding — at least in the short term.

Meteorologists forecast this storm could drop as much as 30 inches of snow on Minnesota and the Dakotas, and in some places it's getting close. Accuweather says some parts of South Dakota saw snow fall at a rate of 2 inches per hour.

The storm's precipitation could make downstream flooding even worse along parts of the Missouri and Mississippi River. But if enough of it falls as snow, it could reduce some of that risk.

Meteorologists expect snow will take a few days to melt, meaning that it will enter rivers in a slower process than if it all fell at once as rainfall. The more controlled trickle should lower the risk of river swelling downstream.

Those few extra days could be crucial for spots like Omaha and northwest Missouri: the ground will have more time to thaw and drain, so it can soak up more water from up north. In areas with broken levees, too much water too fast could cause even more damage. According to insurance firm AON, the Midwest and plains states have already totaled more than $4 billion in economic losses.