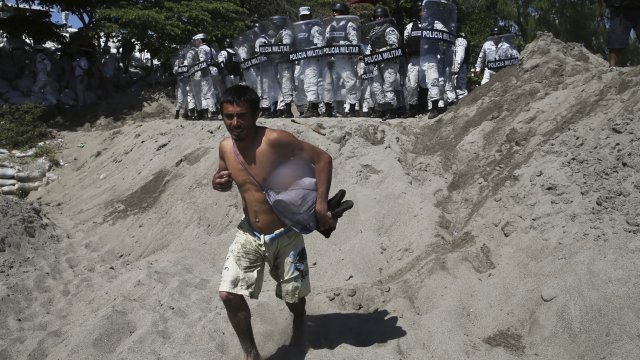 Mexico’s National Immigration Institute issued a statement saying it would detain any migrants without legal status.

The tide was low, and thousands of U.S.-bound migrants marched on— out of Guatemala, through the Suchiate River and into Mexico.

But these cheers stopped when migrants came face-front with Mexican National Guard troops.

Government officials ordered them to block entry into the country.

Mexico’s National Immigration Institute issued a statement saying it would detain any migrants without legal status, and deport them if they couldn't legalize their status.

Some migrants fought against that news by throwing rocks at Mexican forces. Some troops threw rocks back.

But the majority of migrants moved back to the river's edge.

The Associated Press reports a smaller number turned back towards Guatemala.

Mexico's response stems from a deal it made with the U.S., to curb the influx of migrants at the U.S.-Mexico border.

While President Trump views migrant caravans as an "invasion," one Honduran migrant in the caravan thinks otherwise.

Migrants who continue to head north in Mexico are expected to hit highway checkpoints.