Migrant Deaths At An All-Time High Along The Southwest Border 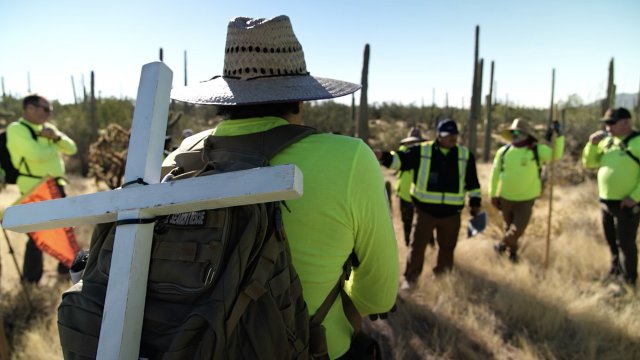 Death records from the Yuma County medical examiner show migrant deaths have already more than doubled in 2021 compared to 2020.

The Remain in Mexico policy is back in full swing after a pause.

Advocates who fought against the revival of the policy say they're worried it could lead to more deaths as migrants grow desperate and take greater risks to cross into the U.S. illegally.

In the Sonoran Desert, a group named Capellanes Del Desierto went on a mission to locate the body of a man who they were told died on his journey north.

Angel Mendoza Pablo believes it could be his brother Santos — a thought that torments his family back home in Guatemala where Santos left behind a wife and five kids.

Death records obtained by Newsy from the Yuma County Medical Examiner show migrant deaths have already more than doubled in 2021 compared to 2020, jumping from 16 to 34. Across the entire southwest border, the U.S. Border patrol reportedly tracked 557 migrant deaths from October 2020 through September of this year - a historic high.

Professor Brad Jones at the University of California at Davis researches migrant deaths.

"It's a killing field," Jones said. "If we were to put a cross out for every migrant who has died in some of these areas, there are places where we would literally be tripping over them."

Pima County Chief Medical Examiner Greg Hess says the border patrol numbers – high as they are – are an undercount compared to what his office sees. Deaths in his sector are more than six times higher than Yuma County. "It's been very hot in southern Arizona in 2020 and 2021, so all of that plays into potential reasons why the number of remains recovered in the last two years has increased in comparison to the previous five or six years," Hess said.

The bodies of unidentified migrants are currently stored at the Pima County morgue, where hundreds of people are reduced to serial numbers on boxes stored in a trailer.

"There's about 500 remains here because we have multiple people in in an individual box," Hess said.

DNA samples are extracted in hopes to identify the person and reunite them with family in their home country.

U.S. Customs and Border Protection's air and marine operations patrol along the border on flights to get a bird's eye view of the migrants' challenges.

Air and marine operations in Tucson reported 63 rescues in 2021.

Down on the ground, the latest numbers released by the Border Patrol show that agents in the Tucson and Yuma County sector responded to more than 650 rescues this year.

Back in the Sonoran desert – where some 20 volunteers set out looking for the remains of Santos – there was no closure for the searchers or for his brother, Angel.

The nonprofit lead seven searches for Santos over the weekend and found a body they say fits Santos' description, but they will have to wait for a DNA test, which could take at least a month for results.