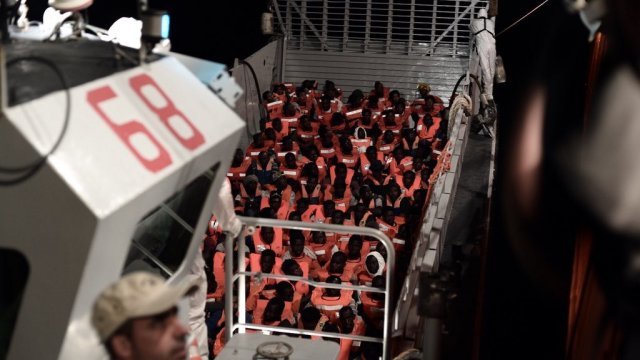 The migrant search-and-rescue ship is operated by Doctors Without Borders and SOS Méditerranée.

More than 600 migrants who were stranded on a ship in the Mediterranean Sea after being refused by Italy's government are now headed to Spain. The country's president announced Spain would accept the rescue ship on humanitarian grounds. Italy's government had refused to let it dock Sunday.

Among the group are 123 unaccompanied minors, 11 children and seven pregnant women. They are on board the migrant search-and-rescue ship Aquarius, operated by Doctors Without Borders and SOS Méditerranée.

Italy's Interior Minister Matteo Salvini is calling on the country to close its ports to migrants. He tweeted Sunday saying everyone in Europe minds their own business, so "now Italy too is raising its head."

Doctors Without Borders said a number of passengers on the ship need medical attention. According to a statement from the Maltese government, Italy asked Malta to let the migrants disembark there, but Malta said it wouldn't let the vessel into its ports either.