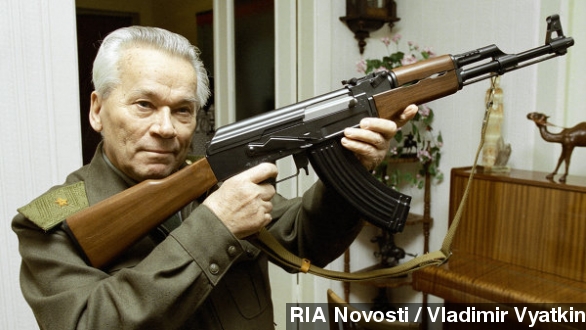 The inventor of the deadliest weapon of the last half-century passed away at a Russian hospital.

​The creator of the most iconic and deadliest weapon of the past half-century, the AK-47 assault rifle, has died.

"Mikhail Kalashnikov died at a hospital in central Russia. He invested the assault rifle that bears his name just after World War II. The AK-47 has been used to kill more people than any other weapon." (Via Al Jazeera)

The weapon's popularity is due to Kalashnikov's design goal of making the gun as simple and easy to use as possible.

"Everything that's complicated is useless. Everything useful is simple. That's always been my motto." (Via Euronews)

Compared to many other rifles, the AK-47 is cheaper to manufacture, more reliable and easier to maintain. Gizmag notes the gun "is still killing as many as a quarter of a million people every year, in every corner of the globe."

But the BBC reports, despite his impact on the frontlines, Kalashnikov’s invention was a bittersweet victory.

“Although honoured by the state, Kalashnikov made little money from his gun. He once said he would have been better off designing a lawn mower.” (Via BBC)

RT adds, as terrorist cells, radicals, and child soldiers began to carry AK-47s, the gun began to give its creator a bad name, but he said he was never bothered by its use.

"He was forever asked if he regretted engineering the weapon that probably killed more than any other in the last fifty years. 'I invented it for the protection of the Motherland. I have no regrets and bear no responsibility for how politicians have used it."

Kalashnikov was one of 18 children in his family. The New York Times reports he was born a peasant before becoming a self-taught tank mechanic and general in the Soviet military.

He was born on Nov. 10, 1919 in Western Siberia. He had been in the hospital for the past month for unspecified health issues.