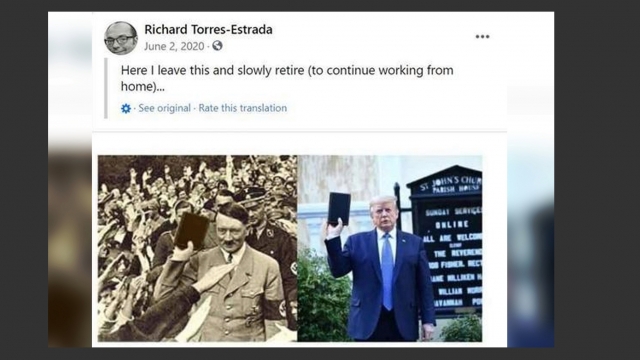 It took just hours for the backlash against Richard Torres-Estrada to begin. As news broke of his new role, these memes began to surface.

This one depicts former President Trump in a similar pose as Adolf Hitler.

Another showing the three bears being arrested outside a home with the caption, “If you still don’t understand how racism works, remember 'she' [meaning Goldilocks] broke into their house. #stopracism."

He’s also made other posts depicting members of Congress, like a "missing" poster of Sen. Ted Cruz.

Now, members of Congress are adding to the growing chorus of concerns. In a letter to the defense secretary, Republican congressman Bill Johnson of Ohio described Torres-Estrada’s posts as disqualifying and demanded his resignation.

“He appreciated the being kept apprised of that, and ... he supports the work that they're doing to look at this more deeply,” Kirby said.

Torres-Estrada was touted as having two decades of experience working in federal agency diversity programs when he was appointed.

No timeline has been announced for when this investigation will be complete. But Torres-Estrada has been assigned to other duties for now.