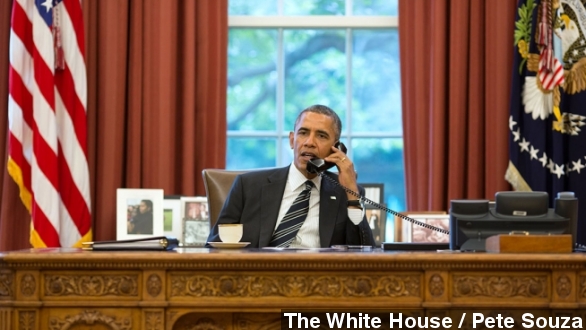 According to a new national poll, the majority of 18- to 21-year-olds disapprove of President Obama and his signature health care act.

They were a big part of getting him into office, but now, according to a new national poll, the majority of 18- to 21-year-olds disapprove of President Barack Obama and his signature health care act.

The poll also says 40 percent of young Americans think Obamacare will only make health care worse, and 51 percent believe it will drive up costs. (Via Politico)

And among the young Americans currently without health insurance, less than a third said they'll enroll in Obamacare.

Interestingly, it's their generation that could prove critical for the law's success. As John Roberts at Fox News explains: "Indeed, the Affordable Care Act relies on a large pool of young, healthy enrollees to pay for older, sicker Americans. Without their premium support, the entire system is at risk of collapse."

This disapproval carries over to millennials' overall feelings about Mr. Obama, too.

Only 41 percent of young Americans said they approved of the president, with 54 percent admitting they disapprove of his performance. (Via The White House)

The director of the Havard Institute of Politics told USA Today, "Although Millennials have held firm in their approval of the president in past polls, we are now seeing a sea change among this critical demographic."

And when asked if they would want to recall various elected officials, 47 percent said they would recall the president.

As National Journal noted: "While there is no provision for a public recall of U.S. presidents, the poll question revealed just how far Obama has fallen in the eyes of young Americans. ... Indeed, Millennials are not so hot on their president."

Harvard's poll comes just as Mr. Obama gets ready to participate in a youth summit at the White House Wednesday to encourage uninsured young Americans to enroll for health care.