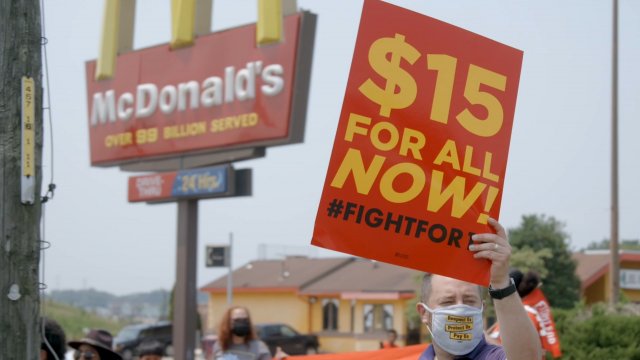 Protests took place across the country Tuesday to raise the federal minimum wage, which sits at $7.25.

Low-wage workers in America are struggling to pay the bills. After a tumultuous year from the pandemic, they’re calling for change.

"We are demanding some more respect and dignity for the workers," said Yadira Hernandez.

Hernandez has worked at two different McDonald's in Virginia over the past decade. Before the state raised the minimum wage in May, she was making $7.25 an hour.

"We are fighting for a better chance to get better payment to pay our rent because here the rent is very high," Hernandez said.

Protests for a higher minimum wage took place in over a dozen cities Tuesday, from New York to Houston … with the rising cost of living playing a key role.

In Virginia, the minimum wage is $9.50. If you’re employed full-time, working 40 hours a week, that’s about $1,200 a month after taxes … far below what’s required to comfortably afford a two- or one-bedroom rental here.

That’s according to a new report, that says you’d need to be making more than double that. Researchers came up with these numbers based on the 30 percent rule, which says we shouldn’t spend more than 30 percent of income on housing in order to have enough for other basic necessities.

Experts say the report is concerning, but nothing new; housing has gotten more out of reach for low-wage workers for years. What is new is those conditions being compounded by COVID-19.

"During the pandemic, the crisis exposed and exacerbated the housing challenges that many of the lowest income people were facing," said Diane Yentel, president and CEO of the National Low Income Housing Coalition.

The industry with the highest percentage of workers earning a wage at or below the federal minimum in 2020 was leisure and hospitality, which was hit hard by the pandemic.

While Congress passed several stimulus bills aimed at struggling workers, the federal minimum wage has remained at $7.25 — the same since 2009.