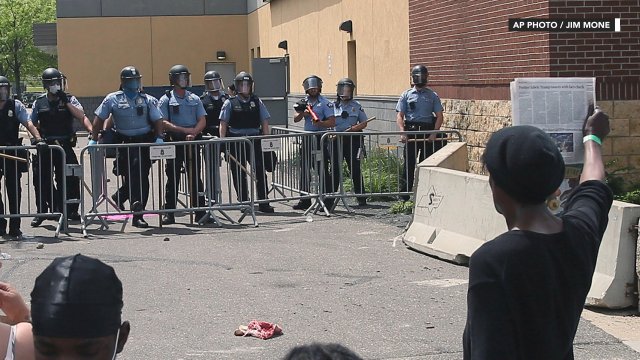 More than 10 police agencies that did not previously give FBI use of force data pledge change, following Newsy questions. 50+ agencies didn't respond.

When a Minneapolis police officer placed a knee on George Flloyd’s neck, until he died, it was the type of incident meant to be tracked in a new national FBI use of force database set to publicly launch later this summer.   But Newsy has learned Minneapolis police are among the many agencies that never sent the FBI any information for its new program.  If it launched today, the FBI Use of Force national database would not include information about the Floyd incident.  A spokesperson for Minneapolis police initially wrote in an email “…we are not sharing this data. We are unaware of any plans to do it in the future.”

Two hours later John Elder, a spokesperson, sent another email telling us to  “HOLD THE PRESSES...We are in conversations with them to send them data.” But the police in Minneapolis would not commit to a start date because, Elder said, "Our database needs to talk to their database."The Washington State Patrol, in contrast, says it found the FBI’s voluntary program simple and important to join.

"Downloading that information into that database is really not that difficult for us," said Sgt. Darren Wright, spokesperson for the Washington State Patrol.  "The public needs to know and be able to see what we do, how we do it. And if we make mistakes, we'll learn from those mistakes, we will correct those mistakes and will move forward."

The FBI began collecting data last January, asking local police to disclose use of force incidents, including non-fatal ones, while providing details such as the race of the people involved. With no penalty for not reporting, however, the FBI confirms most agencies have not yet participated.  A Newsy investigation in June surveyed the nation's ten largest police agencies. Only the LAPD and the Chicago Police Department confirmed they did participate. An agency that tased an African American woman while she sat in her wheelchair, the Harris County Sheriff's Office, said it would begin sharing use of force data with the FBI. The Pennsylvania State Police said the same.The FBI has declined to say who participated in its data collection, which it says will be released later this summer.  Newsy expanded its probe and has now asked all of the nation's top 100 police agencies whether or not they provided information.

So far, an additional nine major police agencies who were not participating before have said, in response to questions from Newsy, they will going forward.  The now 11 total agencies promising reform since Newsy's first report include police departments in San Francisco, Saint Louis, Pittsburgh, Tucson and Dallas. "From this point forward, we will be updating relative information into the FBI database," emailed Sgt. Warren Mitchell, a spokesperson for the Dallas Police Department.  The Connecticut State Police and Maryland State Police said they would also begin reporting, after not doing so before now. The Broward County Sheriff's Office and Palm Beach County Sheriff's Office said they, too, would begin reporting for the first time.

27 of the nation's largest 100 agencies confirmed they already sent the FBI data. 54 agencies have not yet responded or did not directly answer Newsy's questions. Four more agencies say they did not participate before and have no plans to, include the New York State Patrol, San Bernardino County Sheriff, North Carolina Highway Patrol, and the Indiana State Police."I am respectfully and politely going to decline the offer" to conduct an interview about his agency's lack of participation, said First Sergeant Ron Galaviz, a spokesperson for the Indiana State Police.

Some agencies did not know about the federal data collection. "Nobody knows anything about this data base," said Chief Deputy Michele Fisher, a spokesperson for the San Fransisco Sheriff. "We do not participate and we have not been asked to do so."The Philadelphia Police Department did not participate in the FBI database in 2019, according to Sgt. Eric Gripp, a police spokesperson in Philadelphia. "While I can not say for certain whether or not we will participate in the database in 2020, this program is one of many under consideration," he said.

Kevin Robinson,  a former longtime assistant chief of the Phoenix Police Department, said in June that reporting use of force incidents against citizens should be of such high priority for police agencies, they should lose access to state and federal grants if they fail to volunteer the information to the FBI. "If you don't think that is important to report, what message are you sending to everyone in your community? That force doesn't matter," asked Robinson.

The Texas Department of Public Safety joined Minneapolis police in blaming technology as the reason the have not yet reported.  Texas DPS says it provides a smaller amount of information to other state agencies that Texas law requires and that while it intends to join the national data reporting effort at some point, it has chosen for now not to do so. "In order to participate, as of today, DPS would have to enter data into both the DPS system and the FBI system, creating a cumbersome reporting process," DPS said in an unsigned email. However, the FBI's public website says otherwise.  Agencies having trouble or feeling burdened can "..provide the FBI with bulk data if they cannot or do not wish to...”  upload use of force information directly into the FBI system themselves. Agencies that have chosen to participate say transparency is a guiding force for them.

"Use of force can be controversial in any time. Hiding It doesn't do any good either," said Sgt. Darren Wright of the Washington State Patrol.

Mark Greenblatt is the senior national investigative correspondent for Newsy and the Scripps Washington Bureau. Follow him @greenblattmark or email a story tip to  mark.greenblatt@scripps.com. Nick McMillan and Rosie Cima are data reporters and can be followed @ndm_visuals and @rosiecima. You can email them at nicholas.mcmillan@scripps.com and rosie.cima@scripps.com.