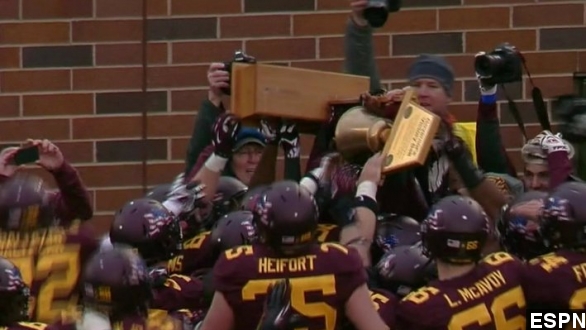 The Minnesota Golden Gophers bested their cross-country rivals, Penn State's Nittany Lions, in their first meeting since 2010. But the three-year long face-off absence wasn't the only thing broken Saturday.

"Minnesota beat Penn State to win the Governor's Victory Bell Trophy today. It's been handed out since 1993. But in the celebration they actually broke the trophy. This is why we can't have nice things." (Via ESPN)

The 20-year-old award is Minnesota's fourth and most recent rivalry trophy. The governors of both Minnesota and Pennsylvania agreed in 1993 that the first matchup between the two teams — which was also the inaugural conference game for Penn State — should be marked in "distinctive fashion." (Via University of Minnesota)

I guess now, the trophy has a distinctive marking. And at least one writer for SportsGrid says it didn't look all that cool in the first place. "Admittedly, the trophy didn’t look like it was any different than the won [sic] you’d get for winning your local little league championship."

And a writer for SB Nation snarks, "This trophy shouldn't exist because Minnesota and Penn State are, like, 800 miles apart from each other, and now it barely exists because the two teams are in different divisions."

If the Golden Gophers were really looking for something to smash, they could've started with the Penn State-Michigan State Land-Grant Trophy. I mean, I'm down for significance and all, but that thing is 12 different types of awful. (Via PennLive)

So, the Victory Bell Trophy didn't quite make it out unscathed, but a writer for Sports Illustrated says the University of Minnesota football club deserves to be proud of everything they've accomplished this season.

The 24-10 win propelled the team to 8-2 this season — its best start since 2003. The win also marks the first time the Gophers won four straight Big Ten games in 40 years. (Via Sports Illustrated)

And they did it without Jerry Kill. The Minnesota head coach has spent the last few months away from the program as he receives treatment for epilepsy. (Via Big Ten Network)

Still, the head coach managed to get in on the festivities by showing his boys how to get down after the big win. Look at him go! (Via University of Minnesota)

The Gophers will have a chance to show that another one of their rivalry trophies is in good hands. They take on Wisconsin on Nov. 23 for the coveted Paul Bunyan Axe.