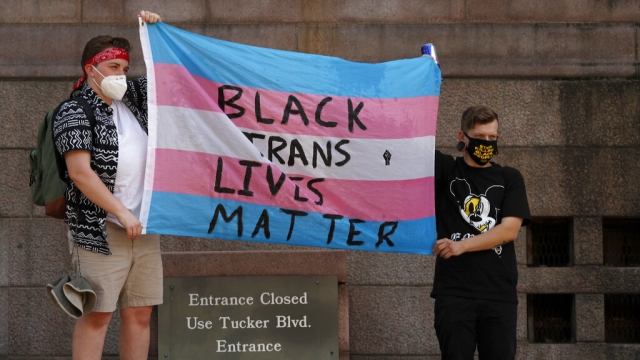 Newsy found a patchwork of policies on how different police departments record crimes against transgender and non-binary people.

"My name is Tori, but if my ID says Thomas and the police report said Thomas Cooper was killed and nobody in the community knows Thomas Cooper, then how are they ever going to solve my case?" asked Tori Cooper, the director of community engagement for the Human Rights Campaign.

This is the reality for some in the transgender community as they deal with a recorded uptick in violence and murder.

There are a few possible solutions to stop misgendering after violent crimes. The first starts with the media.

Blu Buchanan, who studies sociology and uses they/them pronouns, says journalists should dig deeper into a person’s life before reporting.

"If you are a journalist and are reporting on the death of somebody. Taking a few hours to do the footwork, to call that person's family and friends. Hey, what did this person like to be called? What were their pronouns?" challenged Buchanan.

The second is a change in police policies, since journalists often rely on police reports in storytelling.

Newsy found a patchwork of policies on how different cities record violence. For example, Atlanta’s police department lists a person’s sex as what’s written on their official government-issued ID and if any other name is listed, it will be recorded as an alias.

While others, like the Charlotte Police Department in North Carolina, tell Newsy they don’t have a standard operating procedure that outlines interaction with transgender people but are drafting one to put one in place. But advocates are torn on whether police are really the solution.

"I would like police to be more engaged with folks in the community," suggested Cooper.

"But my problem with that is I don't want more cops coming around, for example, Black trans spaces, to ask somebody what their friend's name was. Because that only creates more opportunities for potential violence. The first thing that they can do is go and abolish themselves, just be like 'Leave the community safety to the community,'" said Buchanan.

"It is not public knowledge what I do outside of my friends group. I mean, it's always kind of been that way, especially now. It's like you don't say what I do. We don't talk about work. You're kind of in the closet again. Especially when I’m out in my own community? Because my profession is not appreciated in my community," said Korieo.

And Black Lives Matter sued the city of Seattle in 2020, accusing the police department of excessive force during last summer’s racial justice protests; a judge agreed in part that their use of blast balls and pepper spray violated an earlier injunction against the department.

Korieo says there’s a growing divide between the police force, city officials and the citizens which makes it difficult to build relationships.

Despite the challenges, he says the department’s policy calls on officers to use both the legal name and adopted name on police reports. In a sample he sent to Newsy, a victim's legal name, Frank Simpson, is used in the start of the report, but the preferred name, Tammy, is used throughout the remainder. Some advocates say that should be the standard.

"People change their names and we just call them by their new name. So it's a bunch of crap that when police officers or anybody 'well I can’t call a trans person by their name.' Yes, you can," said Cooper.

Korieo says that his department has been working with nearly 300 departments across the U.S., Canada and Europe hoping to update their LGBTQ standard operating procedures and about a third have put some sort of transgender policy in place since working with his team.