Mississippi Abortion Clinic Is Fighting Back Against Trigger Law 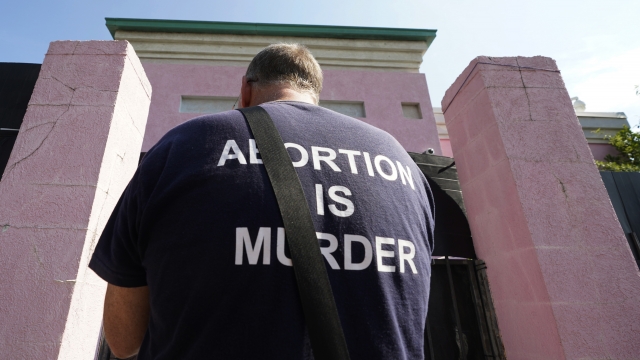 Some people say Mississippi can sometimes seem trapped between history and progress.After years of picking at abortion by creating laws to make it harder and harder to get the procedure, the poorest state in the United States — a state that tops the list when it comes to infant mortality and sits among the worst in hospital care according to WalletHub — passed a restrictive abortion bill that allowed the Supreme Court the opportunity to strike down Roe v. Wade.NEWSY'S TAMMY ESTWICK: Do you think the states prepared to have this influx of children being born to people who may not be able to afford them yet?JIMMY WILLIAMSON: Yes, ma'am. We are one of the poorer states, but we're also one of the most charitable states.Williamson is a navy vet and is one of dozens of people who uses his free time to advocate against abortions. He says he’s been carrying a sign saying "Pray To End Abortion" for about an hour a day for the last eight months."I do think that just the protective instincts, or a lot of that, came from my time in the military, and that's what I believe," Williamson said.In the aftermath of the Supreme Court ripping up almost 50 years of precedent, the ACLU of Mississippi says no one is taking this fight lying down."I think it's become — going to become — extremely litigious," Vara Lyons, with ACLU Of Mississippi, said. "I think we're going to see some creative lawsuits."States are now tasked with the decision to ban the procedure or not.The celebration by those abortion opponents continued after Mississippi’s attorney general certified the results and pulled the trigger, setting off a reaction that would ban abortion 10 days after that certification. "This decision is a victory, not only for the women and children, but for the court itself," Mississippi Attorney General Lynn Fitch said.With the clock ticking, hours later the state's sole abortion clinic, Jackson Women's Health Organization, laced up their gloves to fight back."It's going to be very interesting," Rob McDuff, attorney for the Mississippi Center For Justice, said. "It's this uncharted territory, and it's going to be a very interesting case."The new lawsuit asks a county court to issue an order that would allow the clinic to stay open past the 10-day ban. It also goes further: It argues abortions are allowed in Mississippi state law.  "We are relying upon a 1998 decision of the Mississippi Supreme Court holding that the Mississippi constitution protects the right to an abortion," McDuff said."I grew up in Mississippi, and they talk about the brain drain and how, you know, educated Mississippians leave and don't come back," Lyons said.The ACLU of Mississippi isn’t involved in the suit, but they are hoping the court rules in the clinic’s favor. "I came back, and now I'm coming back to a state where I'm going to have less rights than my mom did in the 70s, in high school, and it's infuriating," Lyons said.Right now, if a woman in Mississippi is looking to have the procedure done, the ACLU says she would be forced to travel to Illinois or Florida. New Mexico could also be an option.Back in Jackson, Jimmy Williamson will still be outside the abortion clinic."Mississippians are some of the best people I've ever known," Williamson said. "I love the city, and I love the people in the city, you know, and we're just trying to help."Centers that do not perform abortions are ramping up, as the battle continues where both sides look to be protectors in one way or another.