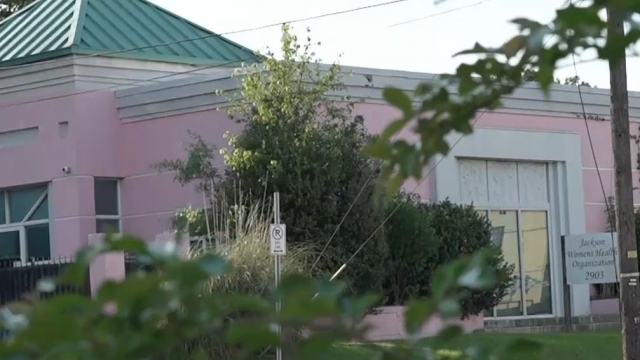 This Mississippi abortion clinic is at the center of the Supreme Court case that could strike down Roe v. Wade.

Sitting in the middle of an art district in Jackson, Mississippi, the pink house sticks out like a sore thumb; in 2013 its owner says she wanted to make a statement for women.Monday’s leaked document from the Supreme Court made its own statement, bringing many to the conclusion that several of those justices plan to reverse Roe v. Wade.  “If the draft of that opinion stands, if those justices will rule with truth, then there will be no pink house or abortion,” said anti-abortion organizer Derenda Hancock.“If this clinic closes, that's it. This is the only abortion clinic in the state and has been since 2006,” said abortion clinic supporter Dr. Scott Crawford. Down this street next to the clinic, there’s an invisible line. On one side, people who escort pregnant individuals into the clinic are keeping them safe from onlookers. On the other side, people use anti-abortion pamphlets and encourage faith to guide drivers down a different path. “I tell them we got a crisis pregnancy center right across the street,” said anti-abortion organizer David Lane.“And so, we've got 20 seconds to try to convince them that, you know, open this up and read it before you make any decisions whatsoever,” said Hancock.According to the Guttmacher Institute, if the Roe v. Wade case is overturned, abortion in Mississippi will end. That's because the state already has laws on the books that makes abortion illegal, if that 1973 case were to be repealed. The Mississippi legislature passed that law in 2007. The only abortions permitted in that case would be if a woman was raped or if the mother’s life is at risk. “There are no safe states. There are states that will last a while. They're coming for them next,” said Hancock.Some might expect the anti-abortion side to celebrate since the information in the leaked draft favors rescinding abortion. But many people in Mississippi say they’re used to challenges in court cases, and surprise decisions, so they’re waiting for an official decision.  “But we have to be patient and wait for the rendering decision of all these justices,” said Hancock.“Drafts change, opinions change, and of course, votes change,” said Omarr Peters of Students for Life of America. But come later this year, they’ll be ready to make a huge statement when the court hands down its decision.