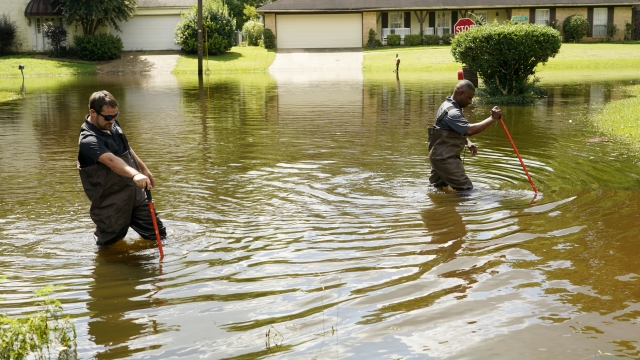 Excessive rainfall has worsened problems in a water treatment plant in the capital city.

Mississippi Gov. Tate Reeves said Monday night that he is declaring a state of emergency after excessive rainfall exacerbated problems in one of Jackson's water-treatment plants and caused low water pressure through much of the capital city.

The low pressure raised concerns about firefighting and about people's ability to take showers or flush toilets.

Reeves said that on Tuesday, the Mississippi Emergency Management Agency will start distributing both drinking water and non-potable water in the city of 150,000 residents, and the National Guard will be called in to help. The governor said he understands people in Jackson don't want to have water system problems.

A swollen Pearl River flooded streets and at least one home in Jackson on Monday, days after storms dumped heavy rain, but water levels were starting to recede. Jackson Mayor Chokwe Antar Lumumba said the water did not rise as high as expected. Earlier projections showed about 100 to 150 buildings in the Jackson area faced the possibility of flooding.

"We thank the Lord most of all for sparing so many of our residents," Lumumba said Monday, hours before the governor spoke about the water system.

The National Weather Service said the Pearl River had crested at about 35.4 feet. That is short of the major flood stage level of 36 feet.

From Arizona to New Mexico deserts and Louisiana swamps, a high pressure system is dumping rain in the South, triggering mass flooding.

Jackson has two water-treatment plants, and the larger one is near a reservoir that provides most of the city's water supply. The reservoir also has a role in flood control.

Lumumba — a Democrat who was not invited to the Republican governor's news conference — said flooding has created additional problems at the treatment plant, and low water pressure could last a few days.

"What I liken it to is if you were drinking out of a Styrofoam cup, someone puts a hole in the bottom of it, you're steady trying to fill it while it's steady running out at the bottom," Lumumba said.

Jackson has longstanding problems with its water system. A cold snap in 2021 left a significant number of people without running water after pipes froze. Similar problems happened again early this year, on a smaller scale. The city has been under a boil-water notice since late July because tests found a cloudy quality to the water that could lead to health problems.

"We have grave concerns for citizens' health and safety," Republican Lt. Gov. Delbert Hosemann said in a statement Monday, suggesting the state take a role in trying to solve the issue.

The Republican House speaker, Philip Gunn, said he has been contacted by hospitals, businesses and schools "pleading that something be done to address the water crisis in Jackson."

Revolt: When It Rains

As the Pearl River started to rise last week, some Jackson residents started moving furniture and appliances out of their homes, and others stocked up on sandbags. Two years ago, torrential rain caused the river to reach 36.7 feet and Jackson homes in the hardest-hit neighborhoods were filled with dirty, snake-infested floodwaters.

"I thought it was going to be a lot worse," Thames said. "I feel very fortunate. I feel very blessed."

Andre Warner, 54, said Monday that his family had put all their furniture up on cinderblocks inside their home to prepare for possible flooding in another northeast Jackson neighborhood.

Warner said the family had to leave home for two weeks during the 2020 flood. Water did not enter their house then, but electricity was off in their neighborhood because other homes were inundated.

"We had to wait for it to drain and dry out for them to cut the grid back on," Warner said.

The Mississippi flooding was less severe than flooding that caused death and destruction in Kentucky last month. Those floods left at least 39 dead and robbed thousands of families of all of their possessions. Nearly a month later, residents are wrestling with whether to rebuild at the place they call home or to start over somewhere else.