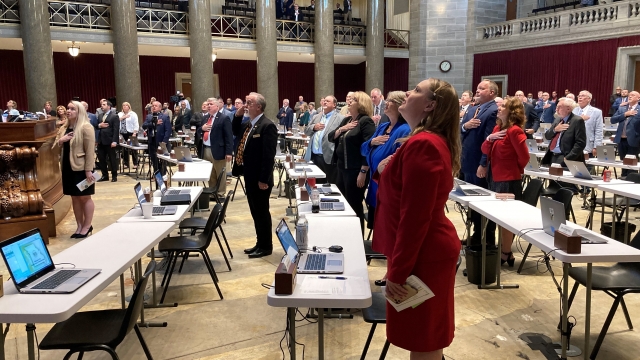 State legislators across the country are gathering for the first time in 2023. While Illinois banned assault weapons, in Missouri, legislators debated the women's dress code and what representatives should wear on the House floor.

"What I'm talking about is adding to the decorum, which is vital in this building," State Rep. Ann Kelley said.

"I've seen a lot of decorum in this room in my two years here, and not once has that lack of decorum spurred from their blazer, and lack thereof," State Sen. Ashley Aune said.

The new dress requirement made national headlines, and made waves on social media, including spawning its own hashtag, #sweatergate.

The tougher dress code now requires women who serve Missouri's House to wear a jacket, like a cardigan or blazer.

"Quite frankly, the people of Missouri are probably embarrassed to find this is what their lawmakers are doing, and they want us to get back to work," State Rep. Maggie Nurrenbern said.

Rep. Kelley spearheaded the new rule, saying she wanted to upgrade women's attire to reflect that of the men's dress code, which requires a jacket, a shirt and a tie. But that upgrade faced pushback within the chamber.

"We are fighting, again, for women's right to choose for something, and this time it's whether she covers herself in the interpretation of someone who has no background in fashion," Rep. Raychel Proudie said.

In 2017, U.S. congresswomen fought for the right to "bare arms," and the dress code changed to allow women to wear sleeveless tops. Still, in the rest of the country, the National Conference of State Legislatures says that as of 2021, about half of the states have some sort of dress code.

Missouri's House is overwhelmingly male. 116 men and 43 women represent the House. One of the representatives, Peter Merideth, chose not to vote on this issue and instead, vote present.

"As a man in a room of 75% men in the legislature, who are constantly voting on women's issues, on issues that don't affect my body but affect someone else's — this felt representative of that bigger picture problem and a way for me to say, 'No, men shouldn't be sitting here debating the details of women's attire and voting on it,'" Merideth said. "As we started talking about this more, I honestly started to see it as such an almost symbolic fight for a bigger fight about how a legislature of mostly men treats women, both in the chamber, the kind of respect that they're given, how much their voices are heard, but also that legislates about women's choices, women's health choices, women's bodies."

That includes issues like abortion, which is completely banned in Missouri.

"I think its disappointing and frustrating," Nurrenbern said. "We are all duly elected representatives sent there to do the work of the people. We have a lot of serious issues facing our state."

Despite the national reaction, Missouri's dress code is not up for debate. The majority of their House voted to implement it.