Members Of His Own Party Are Asking Missouri's Governor To Resign 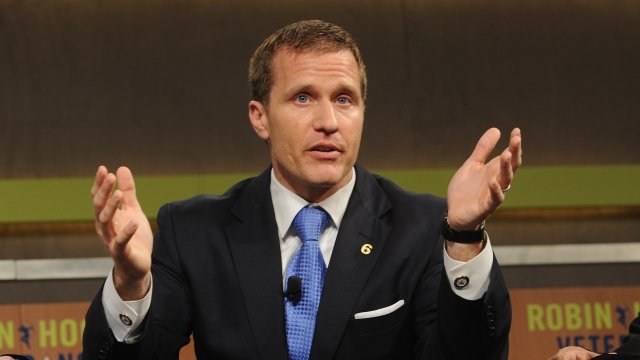 GOP lawmakers are calling for Gov. Eric Greitens to step down after he admitted to an affair but denied allegations of blackmail.

Missouri Gov. Eric Greitens is now facing calls for his resignation from within his own party.

Greitens came under fire last week after he admitted to an affair that happened shortly before he started campaigning for governor. St. Louis station KMOV, which first reported the story, aired an accusation that he blackmailed the woman he had the affair with.

Greitens' attorney denied that claim, even as the St. Louis circuit attorney has opened an investigation.

A Missouri Lawmaker Made Yet Another Controversial Trump Comment

Tuesday, four GOP members of Missouri's legislature called for the Republican governor to step down. At least one of them said his resignation is necessary for the state to move on.

Greitens is pushing back, saying he won't resign. He released another prepared statement Tuesday asking for forgiveness. He hasn't made a public appearance or answered any questions from reporters since the news of his affair broke.