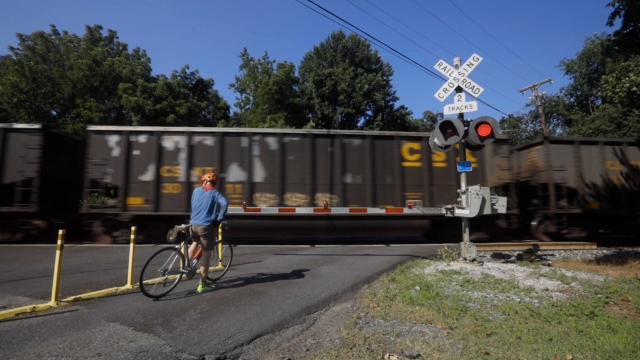 After an Amtrak train collided with a dump truck in Missouri, Newsy found incidents at similar highway-rail crossings are happening more often.

An Amtrak train derailed in rural Missouri after hitting a dump truck at a highway-rail crossing. Four people died.

In 2021, 105 people died in incidents at highway-rail crossings like the one in Missouri.

"It's a lot less than the number of people killed in traffic accidents, of course," University of Delaware Professor Allan Zarembski said. "But it's a significant number."

There are far fewer deaths compared to decades ago. But in recent years, the rate of incidents at highway-rail crossings has been increasing — up 32% in 10 years. That's according to records Newsy reviewed at the Federal Railroad Administration.

The agency is researching why mishaps are climbing, sharing these possible explanations: More rail and highway traffic, development along rail rights of way and individuals engaging in risky behavior.

"Unfortunately, a large number of these accidents are people trying to beat the train," Zarembski said.

The National Transportation Safety Board is looking at another possible factor in Missouri. The crossing did not have an active warning device seen at busier intersections, like a flashing sign or a gate that comes down.

About half of the nation's crossings don't have that kind of active safety equipment. They're considered passive crossings, with signs or markings on the road.

But many are still dangerous.

Newsy mapped three passive warning crossings with the most fatalities in the U.S.: Six deaths at a crossing in Cross County, Arkansas; five dead at an intersection in Las Animas County, Colorado; and five deaths at a rail crossing in Christian County, Illinois.

"Why aren't all crossings protected? It's expensive," Zarembski said. "And don't forget, by the way, a lot of the crossings are in the middle of nowhere. So if I'm putting lights and gates, I need power."

The new infrastructure law includes $3 billion to improve rail crossings across the country.