Mitt Romney Might Go From Trump Critic To Cabinet Member 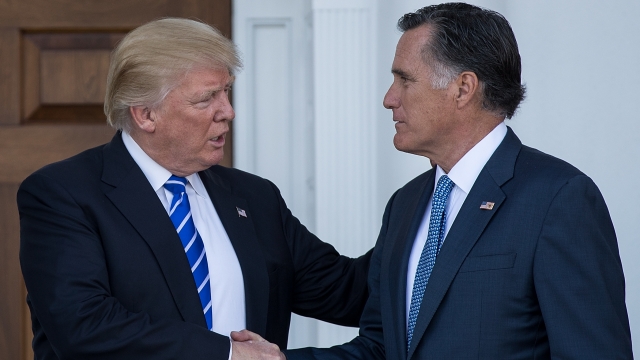 Even though he was one of Trump's biggest critics, Mitt Romney is now under "active consideration" for secretary of state.

Mitt Romney is under "active consideration" to be Donald Trump's secretary of state, according to Vice President-elect Mike Pence.

"Gov. Mitt Romney came in, they had a good meeting, it was a warm and substantive exchange, and I know he is under active consideration to be the secretary of state of the United States along with some other very distinguished Americans," Pence said on "Fox News Sunday."

Trump and Romney met for more than 80 minutes Saturday, but neither of them mentioned the Cabinet position to reporters afterwards.

Still, the meeting came as a surprise to many. During the election, Romney was one of Trump's biggest critics.

"There is plenty of evidence that Mr. Trump is a con man, a fake," Romney said while speaking at the Hinckley Institute of Politics.

"Presidents have an impact on the nature of our nation, and trickle-down racism, trickle-down bigotry, trickle-down misogyny, all these things are extraordinarily dangerous to the heart and character of America," Romney told CNN's Wolf Blitzer.

SEE MORE: Here's Why Muslims Might Be Wary Of Trump's National Security Adviser

So joining Trump's Cabinet might seem like a pretty large leap for Romney to be making. But the two could be trying to patch things up; Romney did call Trump to congratulate him on his win.

And selecting Romney — such a strong critic of Trump's — might be a way to heal any remaining rifts between "Never Trump" Republicans and the incoming administration.