MLB Game To Take Place At 'Field Of Dreams' Stadium 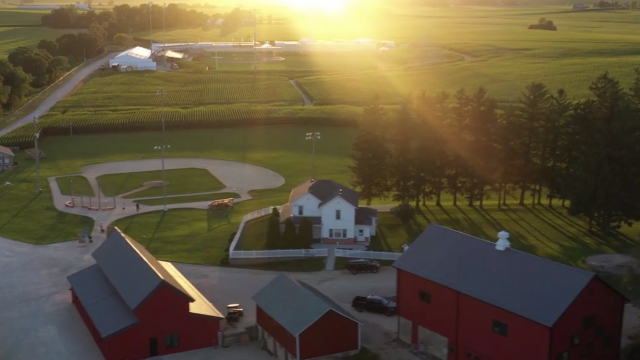 The Chicago White Sox and New York Yankees will face off Thursday at the "Field of Dreams" movie site in Iowa.

"We thought it'd be a perfect time to go and just experience it," Zach Aiello, a "Field of Dreams" visitor said.

Since the '80s, baseball fans have made their way here to Dyersville, Iowa — corn country, about 25 miles west of Dubuque — inspired by the film "Field of Dreams."

"It's one of my dad's favorite movies, and he'd always show it to me as a kid," Aiello said.

Now, Major League Baseball is coming, too: White Sox vs. Yankees Thursday evening to the "Field of Dreams."

The 1989 movie, starring Kevin Costner, James Earl Jones and Ray Liotta, tells the story of a farmer who is compelled to build a baseball field after hearing a mysterious voice in his cornfield.

"This is really the first time since then that the city of Dyersville has been put on the map and on center stage," Roman Weinberg, director of operations at Go The Distance Baseball, said.

Inspired by the movie and fan base surrounding it, MLB has constructed a regulation-size baseball field.

"The game is going to be amazing," Matthew Heistad, a "Field of Dreams" visitor said.

The two teams will hit the field wearing retro uniforms from 1919 in tribute to the film and era of players it highlighted. MLB says the first pitch inside the 8,000-seat stadium will mark the success of a concept six years in the making, after being postponed by the pandemic in 2020. The game will be televised nationally.

"The field was finished itself in the spring of 2020. So in May, they laid the sod down, and that was finished. They've been just up keeping the field since then," Weinberg said. "The stadium, all the surrounding structures are temporary, they will be torn down after the game, but the field will remain."

And just like "Shoeless" Joe Jackson in the movie, players from both teams will have the opportunity to emerge from the cornfield before playing ball.

"I'm excited about going to the cornfields and jumping around in those. Going to the corn maze. I may miss the game," Liam Hendriks, a pitcher for the Chicago White Sox, said.

Tickets for the game are scarce, with many of them distributed through a lottery.

"We wish we had tickets, for sure. But it's amazing that Major League Baseball is, you know, helping Iowa and bringing exposure to the field and to the movie," Chris Hedman, a "Field of Dreams" visitor said.